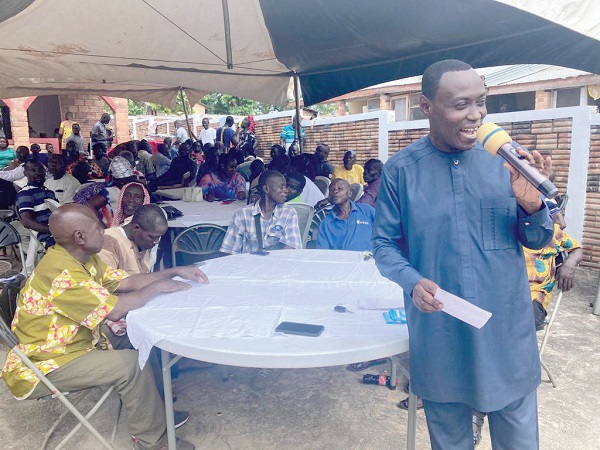 A member of the Council of Elders of the New Patriotic Party (NPP), Dr Jebir Kebir Moussa, has advised the party faithfuls to be disciplined and united to break the eight-year change of governance and political administration.

He charged the members to show commitment in their work to enable the party to maintain power in the 2024 general election.

He said the NPP had the vision, capacity and good programmes to manage the economy to provide better standards of living for every Ghanaian; hence, the need for every member to work towards winning the next general election.

Dr Moussa gave the advice when he organised a get-together for party faithfuls and a cross- section of the people from the Ahafo Ano South West, Ahafo Ano South East and Ahafo Ano North constituencies last Saturday.

The event held at Barniekrom, a farming community in the Ahafo Ano South West District of the Ashanti Region, was attended by about 400 people.

Also present were some traditional leaders, and Odeneho Kwaku Appiah, one of the aspirants for the Ashanti Regional NPP Chairmanship position.

Dr Moussa, who is also a prominent farmer, also honoured the Member of Parliament (MP) for Ahafo Ano South West, Johnson Kwaku Adu, and the District Chief Executive (DCE), Joseph Bonsu, for their contribution to development in the area.

According to him, he monitored the activities of the two leaders, and came to the conclusion that they were up to their duties.

He urged them to continue to work harder and transform the area.

Mr Adu, on behalf of the people, lauded Dr Moussa for his generosity towards the party and his great affection for the people in the constituency.

He assured him that together with the DCE, they would forge ahead and continue to implement policies that would inure to the benefit of the people they served.

On the upcoming constituency elections of the party, he charged all aspirants to be tolerant, and remember that all they needed now was to protect the good image of NPP to make it more attractive to the people.