Rejection of 2022 budget will cause hardships - PaFFAG 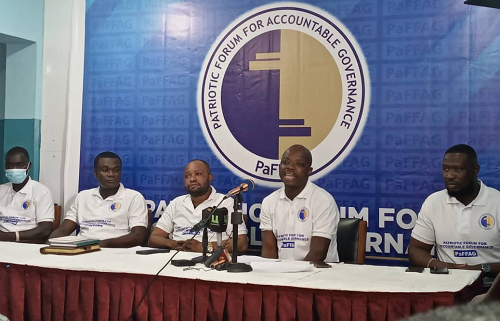 The Patriotic Forum For Accountable Governance (PaFFAG), a newly formed civil society organisation with focus on transparency, accountability and democratic governance, says rejection of the 2022 budget by the Minority in Parliament would bring untold hardships on Ghanaians.

According to the group, the decision by the Speaker, Mr Alban Sumana Kingsford Bagbin and the Minority, to kick against the 2022 budget was a deliberate attempt to frustrate the government and its activities for the upcoming year.

Speaking at a maiden press conference in Accra on November 29, 2021, a former Member of Parliament (MP) for Manhyia North Constituency, Mr Collins Owusu Amankwah, said it was unfortunate that the Minority in Parliament who describe themselves as social democrats, would engage in an activity that would result in creating hardships on the citizenry.

He explained that although Parliament has the power and mandate to reject budgets submitted before it, such situations ought to be treated with the needed caution, bearing in mind a sense of patriotism, statesmanship and nationalism.

Mr Amankwah, who is also a former Vice Chairman of the Defence and Interior Committee of the 7th Parliament, said it was sad that the Minority in Parliament would allow partisan politics to influence their position on a national exercise with enormous consequential effects, stressing that what the Minority had done was against the wishes of majority of Ghanaians.

It would be recalled that Parliament on Friday evening, November 26, 2021, voted against the 2022 Budget Statement and Economic Policy of the government.

This was after the House concluded a debate on the Budget, with the Majority side walking out of the Chamber.

Through the voice vote, the House rejected the Budget when the Speaker asked the question, a few minutes to 8pm on Friday.

The Majority side had walked out of the Chamber and so when the Speaker put the question for those in favour or against, the "No" voice votes had it and there was no "YES" voice vote.

Mr Amankwah, who is one of the Executive Directors of PAFFAG, said the Speaker of Parliament and the Minority, who all belonged to the opposition National Democratic Congress (NDC), had demonstrated their ill-intent to make the government unpopular in order for Ghanaians to vote against the party in the next elections.

He said although the Minority MPs went to parliament on the ticket of the NDC, they were in Parliament not only to serve the interests of the party but the country as a whole and therefore had to put aside their partisanship when dealing with national issues.

"The moment you reject the budget, you have rejected the spending plan of the government and how can the government function without budget," he quizzed, urging the Minority to rescind their decision on the 2022 budget.

The Bono Regional Chairman of the ruling New Patriotic Party (NPP), Kwame Baffoe, popularly known as Abronye DC, who is also an executive member of PAFFAG, said the rejection of the budget if it remained effective, would cause food shortages in the country as government would not be able to procure agro-inputs for farmers for farming.

He said the rejection of the budget would also mean that government would not be able to pay all public sector workers, contractors on various projects, as well as get the money to fund the free Senior High School programme.

For him, the rejection of the budget by the Speaker and the Minority in parliament would not affect the ruling party alone but Ghanaians in general, hence the need for them to reconsider their stance.

Abronye DC also claimed that the Speaker and the Minority MPs teamed up against the budget because the Finance Minister, Ken Ofori-Atta, rejected a GH¢1.7 billion budget submitted by Parliament.

He was of the opinion that the Speaker and the Minority MPs were settling scores with the Finance Minister’s rejection of Parliament’s budget.

The Bono NPP Regional Chairman also urged the government to reduce its proposed E-Levy on mobile money transaction from 1.7% to 1%.

According to him, although government needed to raise enough money to embark on its projects, introducing the 1.7% E-Levy would bring hardships on many Ghanaians and create disaffection for the E-Levy tax policy.