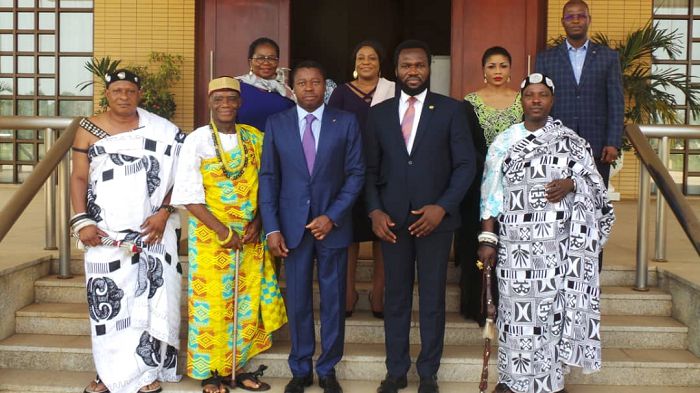 Former President Jerry John Rawlings has urged the leadership of Togo and the political opposition to uphold democratic principles and the rule of law as the country draws closer to the Presidential elections.

He said Togo had come a long way and it is his prayer that all the stakeholders would harness the gains by respecting the sanctity of choice, and protecting the integrity of the elections.

The delegation which was led by Togbi Gbordzor III, Dufia of Woe and Dusifiaga of the Anlo State and included Togbi Hodzi Dunyo, Togbi Tamakloe, Dr. Donald Agumenu and Togolese journalist, Jean Andjaou were in Togo to also commiserate with President Gnassingbe on the demise of his brother, Emmanuel Gnassingbe.

The delegation also discussed regional integration and security within the sub-region, with Dr. Donald Agumenu, aide to the former President, stating that former President Rawlings took matters of intercultural cohesion, justice and respect for human dignity and the rule of law very seriously.

Agumenu said the emergence of insurgency and militant activities within the sub region, if not contained could further undermine sub-regional security, democratic values and socio-economic development. Recent separatist agitations in the Volta Region of Ghana were also discussed.

President Gnassingbe described former President Rawlings as a man of integrity he had a lot of respect for. He also took time to outline the constitutional reforms the country had gone through and its preparedness for the upcoming elections on February 22, 2020.

The meeting also discussed the concerns raised by Emeritus Archbishop Kossi Philippe Fanoko Kpodzro of Lome, who called on former President Rawlings in Accra recently to express concerns about the socio-political issues in his country and how that might adversely affect the conduct of the elections.

President Gnassingbe assured the delegation and all citizens of Togo as well as ECOWAS leaders that he will do nothing under his leadership to undermine the peace and security of his country during the elections.