Rawlings urges NDC not to underrate NPP in December polls 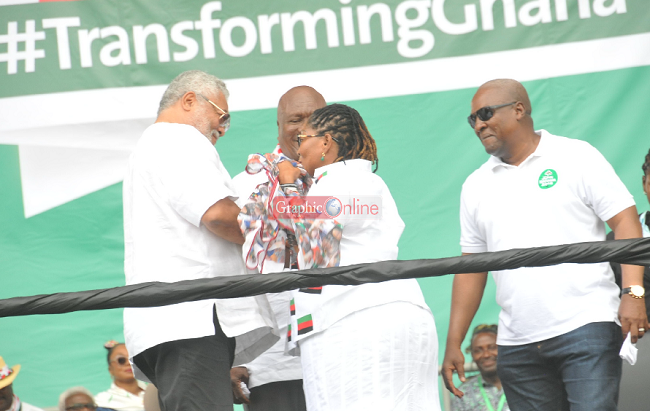 Rawlings, founder of the NDC, said the December polls will be tough and for the NDC to win, it would have to prosecute it on its own terms – the very terms that underpin the party’s formation.

The former president was speaking on Sunday during the campaign launch of the NDC at the newly built Cape Coast stadium.

He has consistently steered the party to tread the path of probity, accountability, transparency and honesty, traits he believes will always endear the party to the masses.

Rawlings said per where the NPP comes from, the nature of who they are and what they are, the NDC has no businesses fighting them on their terms let alone mimicking them, emphasizing that should the NDC stick true to its founding principles, “no one can ever defeat us.”

The former President who said he was reserving his core concerns about the party and how it could rally together as a more united and formidable force to a later date, was full of his usual wits, as he moved the packed stadium to bouts of laughter.

He spoke for instance of the cool breeze Cape Coast had to offer, a tête-à-tête with First Lady Lordina Mahama during which the latter had inquired if the party founder was going to boom, as Rawlings has come to be known for his no-holds-barred castigation of what he perceives to be wrong.

On that occasion, he said he had wondered why the First Lady had come to sit close to him, and he also located his daughter Zanetor Rawlings from her seat, pointing out how attentive she was ready to hear what her dad had to say. Rawlings also called her ‘Osu La Gatha’, a name the doctor-politician has come to be associated with in recent times.

Listen to the attached audio