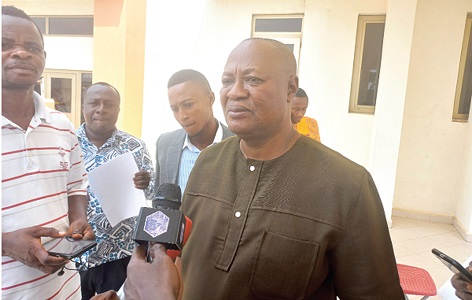 Sam Pyne (right), Metropolitan Chief Executive for Kumasi, with some of the assembly members
30.5k Shares

The Metropolitan Chief Executive (MCE) for Kumasi, Sam Pyne, has appealed to staff of the assembly to prudently manage resources to cut down on the cost of running the assembly.

In line with that, he said the assembly would prioritise its expenditure and adhere strictly to its annual plan and accompanying budget.

Delivering his first sessional address to the general assembly of KMA, Mr Pyne said the finances of the assembly had not been the best lately, but promised to be judicious in the use of its resources.

He said there had been a dip in the assembly’s revenue while expenditures were rising due to the high cost of things in the market now.

“We also know that the assembly continues to have judgement debts and huge costs in the management of waste and sanitation; nonetheless, the assembly and I are determined to control expenditure and ensure that we do not exceed our budget for the year no matter what,” Mr Pyne stated.

As part of the measures to cut down on the expenditure of the assembly, Mr Pyne said management had taken the decision to reduce costs relating to protocol, fuel and hotel accommodation.

“To ensure that these measures instituted by me and management work perfectly, I will take feedback from these exercises and use the same to improve financial controls and ensure the judicious use of the ever scarce financial resources,” the mayor posited.