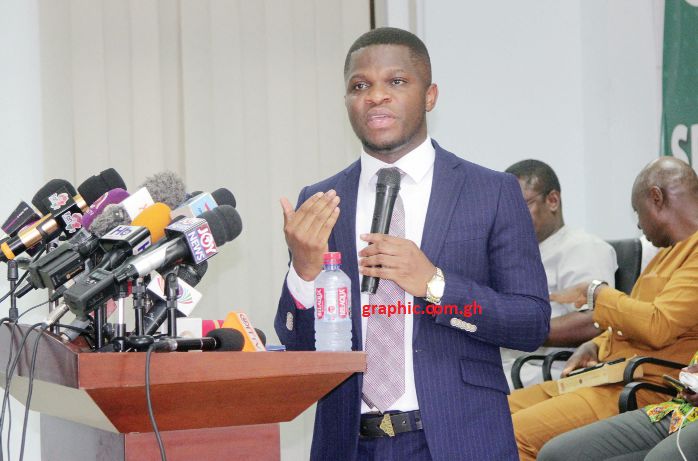 The opposition National Democratic Congress (NDC) has called on the government to prosecute all persons involved in illegal mining, popularly known as galamsey, irrespective of their political affiliation.

The party claimed it had enough evidence to prove that some politicians were ‘ neck deep' in the illicit activity.

Addressing a press conference held in Accra yesterday, the National Communications Officer of the party, Sammy Gyamfi, stated that the NDC was not against mining in principle, however, it abhorred illegal mining, and particularly mining in water bodies and irresponsible mining that destroyed the environment without any plan of reclamation.

“What we are vehemently against is hypocrisy of government officials, who after destroying the businesses of legal small miners, have turned around and engage in the menace with brazen impunity”, he emphasised.

Mr Gyamfi, however, consented that any leader set out to battle a certain crime in society, be it illegal mining, corruption, drug trafficking or any other vice, was bound to face resistance from dark forces, including those who benefitting directly from those crimes.

“However, what distinguishes leaders who succeed from those who fail is the genuine political will not only to bring sunshine on those crimes but to severely punish the culprits in order to serve as a deterrent to like-minded persons who may contemplate those crimes”, he added.


Mr Gyamfi therefore encouraged the government to demonstrate political will in its fight against the menace by prosecuting perpetrators irrespective of their party affiliations.

Mr Gyamfi further state that President Nana Addo Dankwa Akufo-Addo had taken no interest in investigating various reports that allegedly depicted known culprits of “galamsey” despite being privy to these reports.

He, therefore, alleged that the New Paritiotic Party (NPP) government was unwilling to fight the galamsey menace because the party also benefited from the illicit activities.

In addition, he urged the government to accept that it had failed in its fight against illegal mining and not to shift the blame on traditional rulers.

“Instead of accepting responsibility for his failed “galamsey” fight, President Akufo-Addo aided by his Minister of Lands and Naturals Resources, Samuel Abu Jinapor, had resorted to shifting the blame to the chieftaincy institution.

“This latest attempt by the Akufo-Addo government to blame the failed “Galamsey” fight on chiefs and community leaders must be condemned in no uncertain terms,” Mr Gyamfi said.

The NDC Communications Director therefore stated that the President's fight against galamsey would always remain a mirage and he would be remembered by prosperity as the President who promoted illegal mining until he takes the appropriate actions.