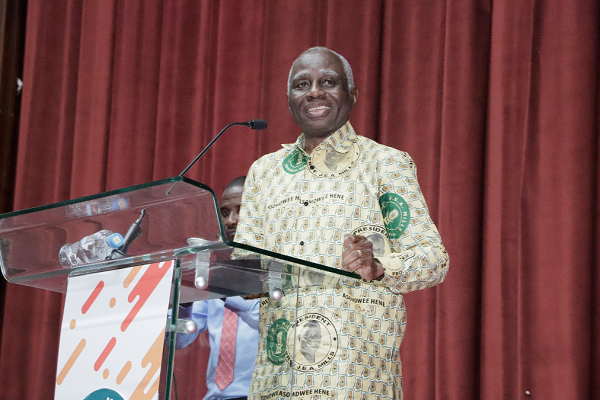 Tsatsu Tsikata, a legal practitioner, speaking at the commemorative lecture to mark the 10th anniversary of the death of the late President John Evans Atta Mills in Accra. Picture: GABRIEL AHIABOR
30.5k Shares

Late President John Evans Atta Mills was on a mission to sanitise the country’s politics through integrity and service to humanity, a legal practitioner, Tsatsu Tsikata, has stated.

Delivering the J.E.A. Mills 10th anniversary commemorative lecture in Accra yesterday, Mr Tsikata said the late President had a great disdain for any form of politics that sought to unjustifiably punish political opponents or score cheap political points which would jeopardise the unity of the country.

In view of that, President Mills throughout his political career was an advocate of political unity and always put the interest of the country first, he said.

“He valued the peace and unity of the country so much so that he would not be goaded into seeking political vengeance by making people in the previous administration targets of persecution during his presidency,” Mr Tsikata pointed out.

“President Mills was not one to orchestrate the jailing of people he considered political opponents. He absolutely meant it when he said even before becoming President that he was going to be a President for all,” the legal practitioner and former Chief Executive Officer of the Ghana National Petroleum Corporation said.

The J.E.A. 10th commemorative lecture was held in memory of the former President as part of activities to mark the 10th anniversary of his death.

Organised by the J.E.A. Mills Memorial Heritage, the lecture was on the theme: “The man John Evans Atta Mills – Ten years on”.

It was chaired by Nana Otuo Siriboe II, the Chairman of the Council of State and Paramount Chief of the Juaben Traditional Area.

The colourful ceremony, held at the Accra International Conference Centre, attracted personalities such as the National Chief Imam, Sheikh Usmanu Nuhu Sharubutu; the Agbogbomefia of the Asogli State, Togbe Afede XIV, who is also the Chairman of the Advisory Council of the J.E.A. Mills Memorial Heritage, family members of the late President, including his brothers, Dr Cadman Mills and Samuel Atta Mills, his son, Samuel Kofi Atta Mills, some National Democratic Congress (NDC) Members of Parliament, led by the Minority Leader, Haruna Iddrisu, some leading members of the NDC such as Prof. Kwesi Botchwey, Kwame Peprah, Kwesi Ahwoi, members of the diplomatic corps and many former officials who served in Professor Mills government, including the Chief of Staff, John Martey Newman.

Highlighting some of the traits of the late President Mills, Mr Tsikata said he was a leader who strived to serve all without favouritism towards a particular group.

In a lecture interspersed with voice clips and videos of some of Prof. Mills’ popular quotes, Mr Tsikata described the late leader as “father for all”, stressing that President Mills gave credence to his pledge to be a President for all when he assumed the highest office of the land.

“I will be a President for all Ghanaians, not the NDC, not my family, not my friends. I want to leave an enduring legacy of a peaceful and united country where there is opportunity and prosperity for all,” Mr Tsikata quoted the late President as saying.

He said President Mills was serious about that pledge and ensured that it formed part of his governance, adding that “he lived up to those declarations totally. He was a “father for all”.

Mr Tsikata said the public and leaders in all spheres ought to learn from the character traits and leadership style of late President Mills which were anchored on integrity, truth, honesty, selflessness and service.

According to him, it was important for the youth to eschew all forms of corruption as exhibited by the late President and select leaders who epitomised such virtues.

“The youth must recognise, starkly, that their current existence and their prospects for the future are starkly jeopardised by lack of integrity in our nation, by leaders who frankly have less of a stake in the future that lies ahead,” Mr Tsikata stated.

He noted that it was important for the legacy of the late President to be remembered to serve as a guiding principle in nation-building.

“His integrity, humility, modesty, sheer decency, hard work are all worthy of emulation if this country is to rise up to its promise,” he stated.

Nana Otuo Siriboe, for his part, said the theme for the event was clearly appropriate as it afforded Ghanaians the opportunity to reflect on the life of Prof. Mills, the virtues he upheld, his principles, what he stood for and his style of leadership as President.

He said Prof. Mills left behind a triple legacy as a sportsman, a politician and an academician.

In those fierce arenas, Nana Siriboe said, he remained a personification of humility.

“I’m informed that as a lecturer at the University of Ghana, he was the president to the amalgamated associations of all the sporting clubs,” the Chairman of the Council of State said.

The Omanhene of Juaben said many described him as affable and approachable.

When he rose to the podium, Togbe Afede said the death of President Mills was a great loss to the nation.

The era of Prof. Mills as President was of inclusiveness and when the country had a man with character as President.

“He was a man of morality and sincerity and to whom Ghana mattered and because of that, he cut across many political divisions,” Togbe Afede said.

Reading a speech on behalf of the wife of the late President, Ernestina Naadu Mills, the Member of Parliament for La Dadekotopon, Rita Naa Odoley Sowah, said the former President saw his leadership and service to the country as a higher calling.

“He was often bruised on the field of politics but he held firm to his personal values of truth, simplicity and respect for all. These were the qualities I loved about him,” Mrs Mills said.