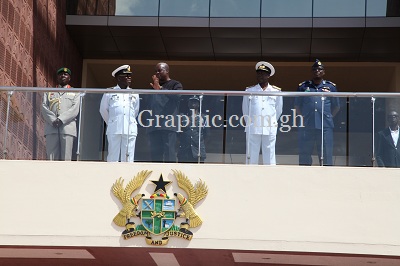 Under the 1992 Constitution of the Republic of Ghana, President John Dramani Mahama is both the Head of Government Business and Head of State.

The difference between the two is that as Head of Government Business, the President is the senior most employee of the Ghanaian State entrusted with the responsibility for maintaining law and order, and implementing policies and programmes to improve the lives and enhance the career opportunities of all Ghanaians.

In performing this role, the President is also empowered to employ Ghanaians he has confidence in to help in the effective administration and public service delivery.

Thus, the power to form a Cabinet and supervise the operations of the national bureaucracy is derived from the fact of being the head of government business.

The Head of Government Business dimension of the President’s function is the most ubiquitous, and reflects in the day-to-day administration of the country, as well as the orderliness of our society.


On the other hand, as Head of State, John Dramani Mahama is also the highest-ranking official in all respects in Ghana. He is the only one vested with powers to act as the chief public representative of the state both in and outside Ghana. But the position of Head of State also comes with important ceremonial responsibilities and duties as well.

Being Head of State requires the President to preside over ceremonial functions. The ceremonial functions of the President as Head of State are divided into two main categories. The first consists of the President representing Ghana to the rest of the world through activities such as receiving foreign ambassadors and high commissioners, presiding over the entertainment of visiting Heads of State, and making state visits to other countries, in support of diplomatic and economic relations; all of which constitutes what is known as the outward duties.

The second, which includes presenting the state of the nation address to parliament, presiding over ceremonies of the armed forces, participating in state celebrations such as taking the salute at Independence parades, signing Acts of Parliament into laws, and meeting with traditional authorities, representatives of political parties etc.

As Head of State, President Mahama last Tuesday, activated one of the inward ceremonial duties known as the “Change of the Guard” at a brief but colourful ceremony at the Flagstaff House in Accra. Changing the Guard is used to describe a formal, often elaborate and well-choreographed ceremony in which uniformed men and women providing ceremonial guard duties at important state institutions such as the Flagstaff House, are relieved by a new batch of colleagues.

It is important to note that Changing of the Guard is a military tradition, whose origin is shrouded in historical uncertainties. What is certain is that in most countries, guards and sentries at palaces, forts and defence establishments are changed periodically to enable a fresh body of guards to take over.

In Ghana, this practice was common and beautifully performed during the First Republic; however, it fell on the blind side of national ceremonial activities in the years of political instability.

President Mahama must be highly commended for taking the initiative to revive this beautiful ceremony, which in some countries is performed on a daily basis.  As a ceremonial activity, Changing of the Guard offers the public an opportunity to at least see either the President within the grounds of the seat of government periodically, or witness the ceremony at close range.

The President and his advisers may have their eye on many things in reactivating this ceremony.

The Changing of the Guard ceremony has the potential to attract the attention of tourists, who may take advantage of the ceremony to visit our country and witness it as well.

It also offers our basic educational institutions an opportunity to arrange excursions for their pupils to coincide with the ceremonies so as to offer such pupils a glimpse of ceremonies they often learn about in history books.

In the current scheme of things, Ghana’s Changing of the Guard ceremony provides an excellent avenue for the Ghana Armed Forces to rotate the responsibilities and duties of ceremonial guards at the Flagstaff House among the various arms—the navy, the air force and the army.

Since his inauguration, it was mainly the army that shouldered the responsibility for this very important ceremonial duty.

Thus, Tuesday’s Changing of the Guard ceremony shifted this responsibility from the army to the navy with the air force waiting for its turn in the next ceremony. In a sense, the presence of the President at the ceremony also underscores his role as the commander-in-chief of the Ghana Armed Forces.

Organising the event at the Flagstaff House as the Renew seat of government evokes nostalgic memories of the Nkrumah era. It is gradually becoming apparent why President Mahama decided to work from the Flagstaff House. Perhaps, it is his way of ensuring institutional continuity by reviving the forgotten but important ceremonial aspects of our national life, and most importantly, revamping the Changing of the Guard ceremony in a location that is very open to public viewing and participation.

The Changing of the Guard ceremony also offers the public an opportunity to witness the sentries and guards who assured the President of their readiness to protect the seat of government in their guard duties.