President Nana Addo Dankwa Akufo-Addo has conferred with representatives of religious bodies and the national leadership of students to seek their inputs into resolving the current economic crisis facing the country.

“Our country is in difficulty, which is economic crisis, and it is necessary for us to find a common way out,” he admitted.

The President, who met the groups separately at the Jubilee House in Accra yesterday, however, gave an assurance that efforts were being made by the government to restore normalcy and stability.

He said the government would also protect the population as much as possible from the adverse headwinds that were blowing in the country.


The engagements were part of a series of meetings the President has been holding in the last two weeks to find a lasting solution to the current economic crisis facing the country.

Some of the groups he has already met are the Trades Union Congress (TUC), the Association of Ghana Industries and the Ghana Employers Association.

President Akufo-Addo stressed that it was his responsibility to implement policies that would respond to the crisis in which the country found itself and, therefore, it was imperative that for whatever was to be implemented to carry greater weight with a higher chance of success, it must be rooted in a broad consultative process.

To that end, he said, the views of individuals, as well as institutions, could be factored into whatever was going to be done to make any outcome meaningful for the country. 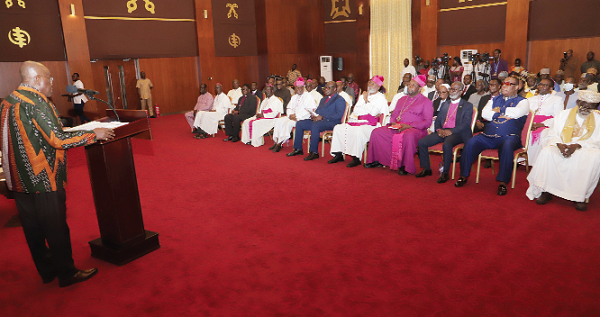 He said a broad-based input was needed as negotiations with the International Monetary Fund (IMF) continued, as well as the processes leading to the fiscal budget for 2023.

“No matter the nature of the proposals, we can be sure that we are carrying the broad-based support of the country along with us in the measures that have to be taken,” he said.

“At the end of the day, we have the responsibility of making the policy, but I would like to believe that before the policy is concretised, I have to reach out to a broader and wider section of Ghanaian thinkers and actors as possible, so that I am in a strong position to conclude the policy,” President Akufo-Addo said.

Highlighting the economic situation in his meeting with the religious bodies, President Akufo-Addo said the situation had, in the last five years, been “topsy turvy” in terms of what had been achieved.

He said considering the problems that had emerged, consultations were important to be able to find a coherent way forward.

“I would like to hear from you also — what your take is on where we are and some of the suggestions you have for the way forward for our country,” he said.

“Yes, you are Men of God, but I take seriously your place in the body politic of our country because your voices count so much in the deliberations of our nation and so that makes sense with the government, especially one that itself is inspired by the belief in God,” he added.

The President added that the broad engagements were also a means of uniting the country.