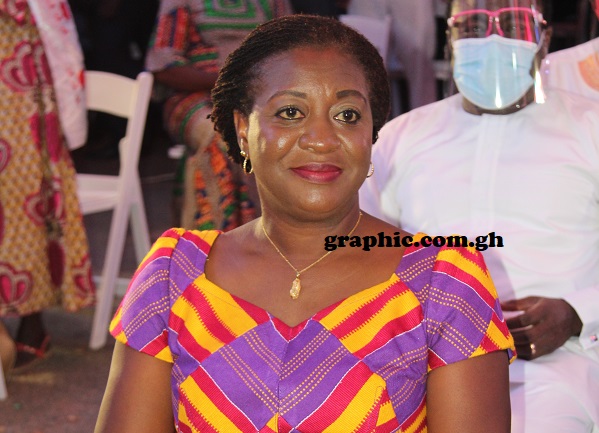 The presidential candidate of the Progressive People’s Party (PPP), Ms. Brigitte Dzogbenuku, has reiterated the resolve of the party to ensure the election of the Metropolitan, Municipal and District Chief Executives (MMDCEs) if the party wins political power on December 7, 2020.

The policy, she stressed, would make the MMDCEs to render proper account and work according to the aspirations of the people.

Ms. Dzogbenuku said this when she called on three personalities and their subjects at Akyem Oda last Sunday to introduce her running mate, Mr. Kofi Asamoah-Siaw, who is a native of Oda to them.

The personalities are Obrempong Gyamfi Saforo Kyereh and Nana Akua Asantewaa III, the Krontihene and queenmother of the Akyem Kotoku Traditional Area, respectively, as well as the chief of Oda Zongo, Alhaji Sulemana Adamu.

Ms. Dzogbenuku advised Ghanaians to change their voting pattern of always casting their votes for the New Patriotic Party (NPP) and the National Democratic Congress (NDC).

She said this was the time for the electorate to vote for the PPP that they could benefit from good governance and equitable distribution of quality development projects.

She emphasised that a PPP government would pay special attention to gender balance in political appointments.

The National Chairman of the PPP, Nana Ofori Owusu, who introduced Ms Dzogbenuku to the people, described her as a unifier, humble, hardworking and a peace maker, who could transform the nation into paradise if she was elected as the President on December 7, 2020.

In his contribution, Mr. Asamoah-Siaw admonished Ghanaians to elect Ms. Dzogbenuku to transform the educational sector and modernise agriculture for the benefit of all.

The Krontihene of Akyem Kotoku, Obrempong Saforo Kyereh, appealed to all political activists to strive in conducting their campaigns with civility devoid of insults, intimidation and other acts of violence, to sustain the prevailing peace, unity and stability in the country before, during and after the upcoming election.

At a meeting with the Zongo chief, Alhaji Sulemana Adamu wished the PPP well in its endeavours.

The PPP presidential candidate, her vice and the national executive of the party also attended the Oda Old Town Wesley Methodist Church where the Superintendent Minister, Rev. Perpetual Dela Gator Sackey, on behalf of the church, presented a citation to Mr. Asamoah-Siaw for his commitment to the development of the church and humanity.