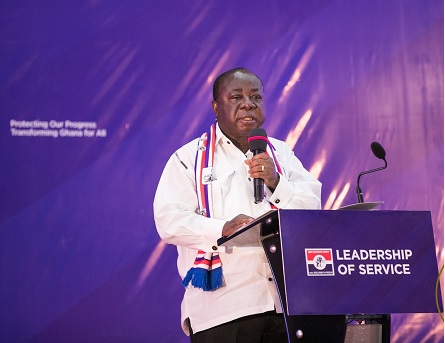 Freddie Blay, the National Chairman of the NPP Follow @Graphicgh

Anxiety and tension have gripped many polling station executives of the New Patriotic Party (NPP) over their inability to obtain nomination forms to begin the party’s internal elections ahead of the crucial 2024 general election.

This has compelled the national executive of the party to extend the closure of nominations, which was scheduled for yesterday, to today.

The NPP has set an agenda to break the eight-year cycle of being in power.

But since the nomination opened last Saturday, there have been suspicions and disturbances in some constituencies, as some aspirants accused election committee members of not making the forms available for purchase.

This is against the background that some leading party executives are said to have paid for the forms to enable all aspirants interested in contesting to do so.

From Ningo-Prampram in the Greater Accra Region to New Juaben North and Kade in the Eastern Region; Kwadaso, Manhyia North, Asante Akim South, Atwima-Kwanwoma, Asante Mampong, Ejisu, Asante Akim North to Kwabre East in the Ashanti Region, there have been disturbances as a result of the unavailability of the forms.

In the Northern Region, Tolon and Nanton are the hot spots of the disturbances as aspirants have accused leaders of not making the forms available.

The Upper East Region is reported to be peaceful, as the regional executive supervised the distribution of forms for aspirants in all the constituencies.

At a news conference to extend the deadline, the National Chairman of the NPP, Mr Freddie Blay, directed all polling station and electoral area executives to comply with the new directive, reports Zadok Kwame Gyesi.

He urged them not to deny any eligible candidate the nomination forms, adding that the party had made available adequate forms for all the 38,632 polling stations across the country to facilitate the smooth conduct of the exercise.

Mr Blay said the party leadership had been monitoring the exercise keenly and would not allow anyone to mar the exercise.

He also urged all party stalwarts who wanted to purchase the forms for aspirants to channel the money for the forms through the party headquarters.

The NPP’s Director of Research and Elections, Mr Evans Nimako, in an interview with the Daily Graphic, asked all aspirants to remain calm, as the party would overcome the teething challenges. 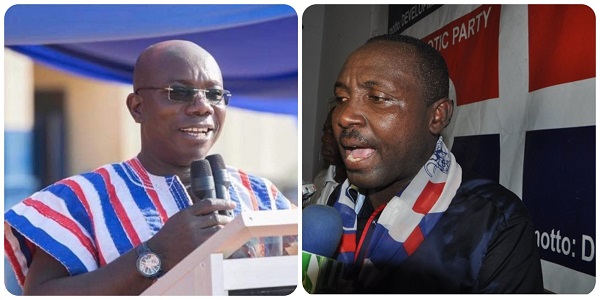 He assured all aspirants that their needs would be catered for.

He also reminded them to use internal party processes to seek redress.

The aggrieved party members noted that if the national executive did not intervene, the party's attempt to retain power would be a fluke.

One of the aspirants, Mr Gabriel A. Martey, accused the constituency executive of holding on to the nomination forms for their personal interest.

He alleged that the executive, instead of opening the party office to sell the forms to potential aspirants, kept them in their homes and gave them out to their favourites.

The Constituency Chairman, Mr Michael Tetteh Eku, declined to comment, saying that he had been instructed by the party hierarchy not to grant any media interview over the alleged confusion.

From the Northern Region, Mohammed Fugu reports that some members of the party had accused some executives of failing to open nominations for candidates interested in contesting as polling station and electoral area coordinators.

More than 100 members of the party were stranded at the party offices in the Tolon and the Nanton constituencies which were locked up, denying them opportunity to pick up forms to contest the elections.

The situation degenerated into chaos, as the aggrieved members threatened to destroy the party property and attack some executive members whom they accused of being behind the matter.

As of yesterday, which was supposed to be the deadline for the opening of nominations, no known aspirant had been able to access the forms.

In Nanton, the aggrieved party supporters said the forms were nowhere to be found and the executive could not tell them where the forms were.

One of the aggrieved members, who only gave his name as Sahanaa, told the Daily Graphic: “Since they opened nominations, we have done all we can to get the forms but it has not yielded any result and no executive seems to know where the forms are.”

The situation was not different in Tolon, as the aggrieved members last Sunday morning besieged the party office, demanding the release of the forms.

The Constituency Youth Organiser, Alhaji Kobshiyi, narrowly escaped attack when he went to the party office to try and disperse the angry party supporters.

Reacting to the issue, the Constituency Secretary, Dr Hudu Zakaria, refuted claims that executives of the party were hiding the forms.

“It is not true that we have denied them access to the forms; the issue is that we are still sorting out things before selling the forms,” he explained.

Checks by the Daily Graphic indicated that the situation was different in the North East and the Savannah regions, as all interested candidates had picked nomination forms.

The various polling stations and electoral areas were said to have come to a consensus on the persons they wanted to take up the positions.

Members of the party also agreed unanimously to conduct the elections in areas where the incumbent executives had passed on or been suspended from the party.

The Nalerigu/Gambaga Constituency NPP Communications Officer, Mr Haruna Ibrahim, said no incident had been recorded in the area so far.

“The election committees have gone round all the electoral areas and polling stations to sensitise the members to the elections and everything is moving on smoothly,” he said.

In the Ashanti Region, which is the stronghold of the party, confusion broke out in the Kwadaso, Manhyia North, Asante Akim South, Atwima-Kwanwoma, Asante Mampong, Ejisu, Asante Akim North and Kwabre East constituencies.

Kwadwo Baffoe Donkor reports from Kumasi that calm has returned to both Kwadaso and Manhyia North following a stand-off between the aspirants and the party executive over nomination forms.

While some angry aspirants in Kwadaso had to literally chase the chairman to the Suntreso Police Station where he had gone to seek refuge, the police had to whisk the Member of Parliament (MP) for Manhyia North, Mr Kwasi Konadu, to safety last Saturday.

In Kwadaso, following the initial hitches in the distribution of the nomination forms, the issue was resolved and the forms were distributed virtually to those who could not access them.

The party members also accused the executives of trying to change the constituency album by fixing their favourites to skew the election in favour of some aspirants.

In Manhyia North, the misunderstanding was between supporters of the incumbent MP, Mr Konadu, and his predecessor, Mr Collins Owusu Amankwah, over the distribution of the forms.

It was alleged that the MP was seen distributing the forms to his supporters in their homes, while others had queued in the sun waiting for their turns.

That allegedly angered some of the constituents, who wanted to beat up the MP and retrieve the forms from him.

However, another group claimed that it was the former MP who sent thugs to the party office and demanded the forms to be shared equally.

Both Messrs Konadu and Amankwah denied the allegations levelled against them.

The timely intervention of the police ensured that both sides reached a memorandum of understanding, leading to all aspiring candidates receiving nomination forms.

The acting Ashanti Regional Secretary of the NPP, Mr Kwame Adom Appiah, acknowledged that there had been some few incidents with the distribution of the nomination forms in the region for the polling station elections.

He said the problem arose as a result of the inadequate number of forms received from the national office.

In Asante Akim South, some supporters besieged the residences of the Constituency Chairman, Mr Gilbert Adarkwa Yiadom, and the Municipal Chief Executive (MCE), Mr Alexander Frimpong, over their inability to access the forms, reports the Ghana News Agency (GNA).

They accused the constituency executives of deliberately denying them access to the forms in order to manipulate the elections in favour of their preferred candidates.

Similar reports were recorded in Atwima-Kwanwoma, Asante Mampong, Ejisu, Asante Akim North and Kwabre East, according to the GNA.

In another situation in New Juaben North in the Eastern Region, aspirants were stranded at the party office as the executives were not present to distribute the forms.

They alleged that it had been the modus operandi of the constituency executive that the forms ended up in the hands of “family and friends”.

Interestingly, in Abuakwa North, for instance, scores of party members thronged the constituency office at night to sleep there to wait for the forms.

In its schedule of activities for elections, the NPP indicated that all elections, from the polling station through constituency, regional and national, would be held from February 19 to July 16, this year, with the national executive elections and the Annual National Delegates Conference slated for July 14 -16, this year.

The distribution of nomination forms for prospective contestants for the election of polling station executives has been smooth and peaceful in all the 15 constituencies in the Upper East Region, reports Gilbert Mawuli Agbey.

The exercise began peacefully last Saturday, devoid of hoarding and handing over of the forms to cronies and incumbent polling station executives.

In Bolgatanga Central, the First Vice-Chairman, Mr Thomas Ayoore Adams, said the constituency executives divided themselves into two and toured all the 27 electoral areas to hand over the forms to the aspirants.

In Bolgatanga East, the Daily Graphic gathered that the Vice-President, Dr Mahamudu Bawumia, had paid for the nomination forms for all the incumbent polling station executives seeking re-election.

According to the acting Constituency Chairman, Mr Asumbekere Karim Anagbila, only aspirants who were contesting for the first time paid GH¢10 for the forms.

Checks in the other constituencies in the region revealed the process had been orderly and transparent, as the forms had been made readily available and no one had been prevented from picking a form to participate in the electoral process.

For his part, the Upper East Regional Secretary, Mr Cletus Innocent Ayambire, said those who would be successful at the close of nominations and also go through the vetting process would contest the elections.

The Sunyani East Office of the NPP began selling the nomination forms after confusion and several agitations had marred the exercise last Saturday.

As early as 5 a.m. last Saturday, some interested party members rushed to the party office to purchase the forms.

However, they were disappointed when the constituency executives failed to show up to sell the forms.

Some supporters stayed at the office until 1 a.m. the next day, with the hope that the leadership would show up, to no avail.

With their hopes dashed, the aggrieved aspirants ransacked the party office to show their displeasure at the attitude of the constituency officers.

When the Daily Graphic visited the party office yesterday, it was closed, with some broken glasses and blocks at the entrance.

It was observed that the suspected attackers forced open the office, as the front glass door leading to the office was also smashed.

As of 4 a.m. yesterday, hundreds of the party faithful had already rushed to the party's office to purchase the forms.

However, they were later moved to the Sunyani Municipal Assembly, where the forms were sold to them, amid tight security.

The Daily Graphic gathered that the General Secretary of the NPP, Mr John Boadu, and the Bono Regional Chairman, Mr Kwame Baffoe, visited the sales point to monitor the exercise.

The NPP opened nominations for candidates interested in contesting as polling station and electoral area coordinators from February 19 to 21, 2022.