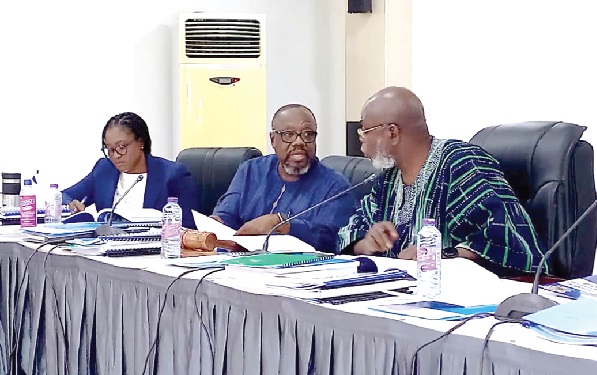 The Chairman of the Public Accounts Committee (PAC) of Parliament, James Klutse Avedzi, has called for the strict enforcement of procurement laws to prevent breaches and revenue leakages.

He said in spite of the existence of laws governing public finance management, public officials continued to breach such laws, resulting in huge loses of public funds.

"We have noticed over the years that, most of the public office holders don't take the procurement laws serious, so if they are punished severely for procurement breaches, it will serve as a deterrent to others," he stated.

Mr Avedzi, who made the call in an interview with Journalists on the sidelines of the PAC sitting in Tamale last Tuesday, said to prevent procurement breaches, there was the need to severely punish offenders to serve as deterrent to others.

"Each year, you find public officers appear before the Committee and be begging for mercy; this time round we won't tolerate that. We will recommend, pursuant to the Financial Management regulations, for further action," he stated.

The Committee has begun public hearings in Tamale to consider the Auditor-General’s reports referred to the committee.

The reports include, the report of the Auditor-General on Universities and Polytechnics and all Pre-University Educational Institutions in the Northern, Savannah and North East regions cited in the report for the period ended 31st December, 2018.

Also, it will consider the reports of the Auditor-General on the Management and Utilisation of District Assemblies Common Fund and other Statutory Funds.
The Committee is expected to end the sitting on Saturday, April 23, 2022.

At the sitting last Tuesday, issues that were raised included unsubstantiated payments, failure to withhold taxes leading to revenue losses, sole procurements among other financial irregularities.

For instance, the committee cited the Former Rector of the Dr Hilla Limann Technical University, Wa, Professor Emmanuel Owusu-Marfo and two other officers for authorising various payments, amounting to about GH¢27, 839 that could not be accounted for.

It, therefore, directed management of the university to retrieve the money from the former Rector and the other officers involved.