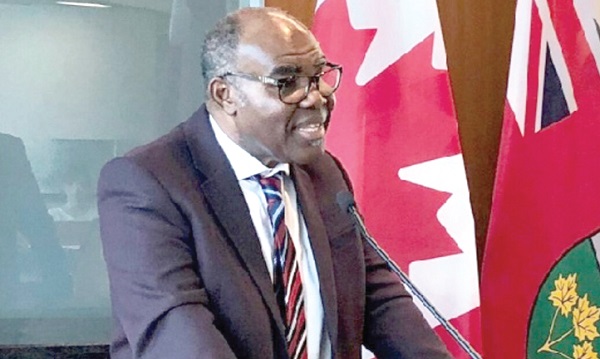 With about three months to the New Patriotic Party (NPP) delegates conference to elect national executive, former Ghana’s High Commissioner to Canada, Ayikoi Otoo, has joined the race to become the national chairman of the party with a pledge to ensure that ministers of state and government appointees attend to the needs of members of the party.

He has also pledged to make the party’s rules and regulations that govern internal elections work if elected as leader of the party.

In an interview with the Daily Graphic in Accra yesterday, Mr Otoo, who is also a former Attorney-General and Minister of Justice under former President John Agyekum Kufuor, said it was important that the needs of grassroots members of the party, as well as aggrieved members, were taken care of.

As to why he was coming into the race, Mr Otoo said he would be galvanising grassroots support to enable the party retain power in the 2024.

That, he said, he would do through resolving the concerns of members of the party to keep them in the party and bring in more members.

He explained that from the fallout from the party's internal elections for polling stations and Electoral Area Coordinators, it was important to address their concerns to keep them in the party, stressing that “those who cried foul pointed to inequitable application of the rules/regulations for the contest”.

“Party politics, it is said, is about numbers and, therefore, everything humanly possible ought to be done to avoid party members and sympathisers becoming apathetic after the elections,” he stated.

Mr Otoo, who is also a former chairman of the Constitutional Committee of the party, said he would ensure that rules/regulations fashioned for the purpose, as well as their implementation were applied fairly and equitably to make it possible for all those ready and willing to contest for positions in the party at all levels.

“This, in my view, will lead to inclusiveness and surely prevent apathy,” he stated.

With the party scheduled to go for the election of constituency, regional and national officers, Mr Otoo called on managers of the process to avoid indulging in practices that would lead to politics of exclusion and apathy.

“We must avoid doing things that will prevent the party from getting a clear majority in Parliament after the 2024 elections,” he said.

When asked if it was not late in the day for him, Mr Otoo said the party was now conducting internal elections to determine the delegates for the regional and national executive contest in place; hence, it was not late.