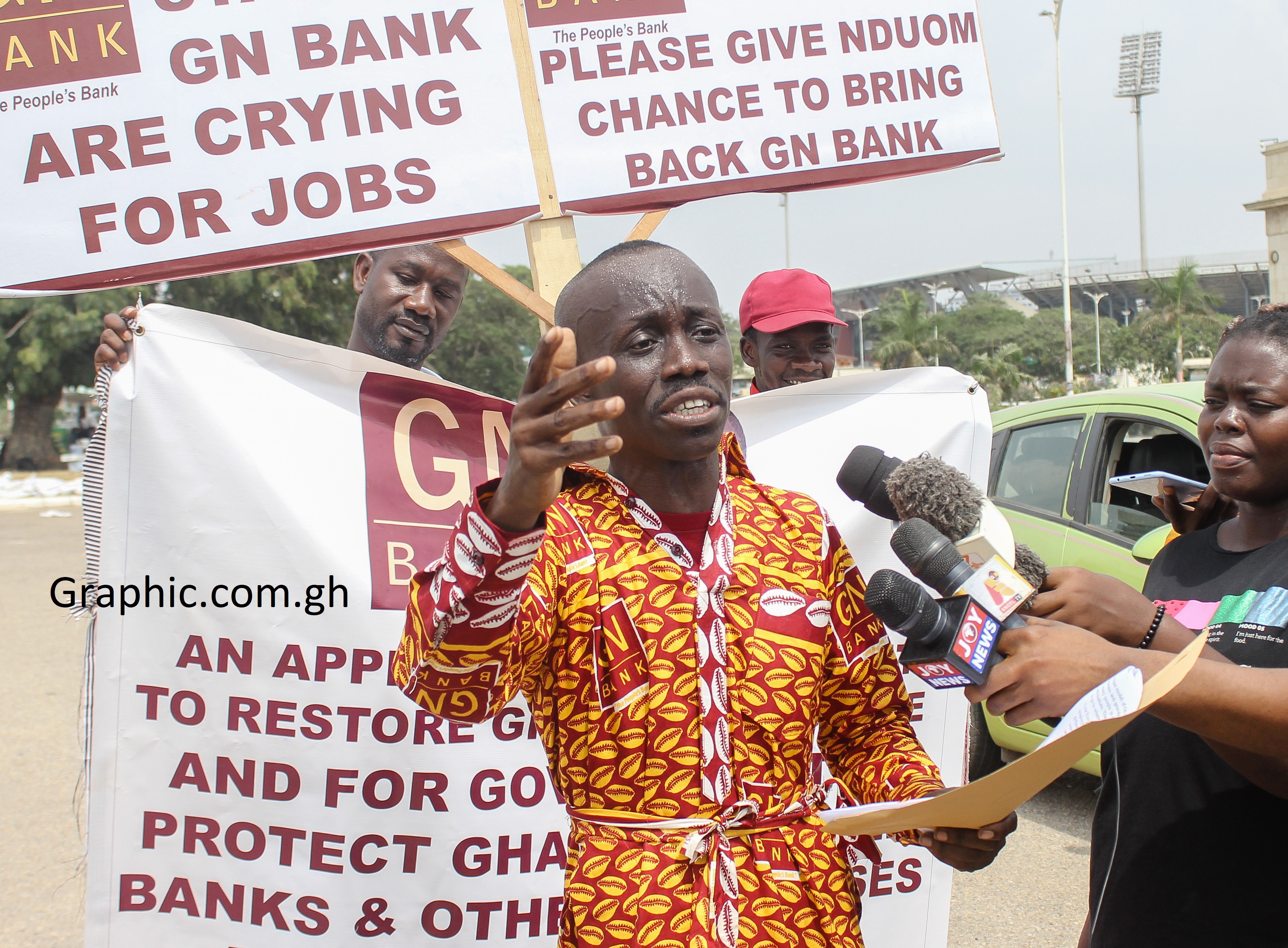 The emotionally charged Sarpiah, who was wielding a megaphone, sang gospel songs and prayed with tears running down his cheeks while making passionate pleas to the President.

He wielded placards which read “Nana we are suffering, our PF is still not paid since 2019,” “6,000 ex-staff of GN Bank are crying for jobs” and “There are no jobs, please give Nduom a chance to bring back GN Bank.”

Aged about 45, he said, he worked for the bank for eight years before the revocation of its licence in 2019, as part of a financial sector clean-up initiated by the government.

“I passionately appeal to Your Excellency as the Father of the Nation, to consider all the factors, especially the plight of the former employees and our dependants, and with the powers graciously vested and entrusted in you by the ordinary citizens such as myself, to bring back GN Bank to restore our livelihood,” he said in a petition he presented to the Presidency in Accra Friday (Jan 20, 2023).

Mr Sarpiah, who was the Head of Operations and Coordinator of the bank’s Micro Enterprise Business (MEB) department, said the revocation also cut short his dream to contribute to the building of a model financial institution with unique characteristics.

The lone protestor who was fully clad in a GN Bank branded African print, marched from the Obra Spot at the Kwame Nkrumah Interchange in Accra through the Kwame Nkrumah Avenue (Circle to Accra), to the Farisco Traffic Light at the Graphic Road intersection, through the Kojo Thompson Avenue to the Liberia Road.

He proceeded to the Cedi House, the National Theatre, the Head Office of the Ghana Revenue Authority and finally to the Black Star Square where the petition was received by a Presidential Staffer, Adu Asabere.

The police were present to provide him protection and also ensure free traffic flow.

About eight police personnel, including three females, dressed in riot and crowd control gear, walked briskly behind Sarpiah who kept a fast pace along the route, accompanied by the media.

There were other police personnel in full gear on pickup trucks and vans, while others were stationed at various points along the route [Watch video attached below].

According to Mr Sarpiah, before its closure, the bank provided employment for more than 6,000 youth, a significant number of who had only senior high school qualification.

He, however, lamented that many of them had failed to secure jobs and were now living under very terrible conditions.

Mr Sarpiah said the model of the bank was to build wealth, provide jobs and life improvement opportunities for ordinary citizens in cities, towns, villages, communities, hamlets and markets which led the institution to establish branches at certain locations even before they became regional capitals.

“In line with the unique model of the bank, 300 branches of different sizes were established across the country because the shareholders had a vision to establish an indigenous community bank that would stay for decades to better the lives of indigenes,” he added.

Mr Sarpiah, therefore, called on President Akufo-Addo to use a more progressive and human-centered approach to address some of the operational challenges the bank faced which was perceived as a risk to the financial system rather than the outright closure.