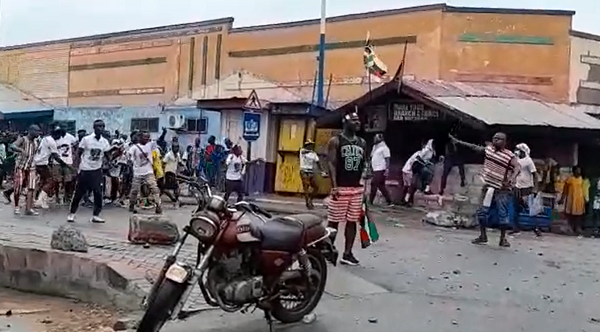 Several people were injured as some supporters of the New Patriotic Party (NPP) and National Democratic Congress (NDC) yesterday engaged in a bloody clash at Jamestown in the Odododiodoo Constituency in the Greater Accra Region.

A tricycle was set ablaze during the rioting, with about 10 persons receiving treatment at the Korle Bu Teaching Hospital as of last night.

No arrest had been made as of press time yesterday, but the police indicated that efforts were underway to get some people whose names were mentioned for allegedly initiating the fight.

Meanwhile, police have intensified its presence in the area to prevent reprisal attacks.

The Public Relations Officer (PRO) of the Accra Regional Police Command, DSP Effia Tenge, said at about 7:30 a.m., the Odododiodioo Constituency branch of the NDC embarked on a health walk within the constituency.

She said the police were notified, so policemen under the Divisional Command were drawn to provide security.

She said the health walk was led by the incumbent Member of Parliament (MP) for the Constituency, Mr Edwin Nii Lante Vanderpuije, with key party functionaries and party supporters in attendance.

DSP Tenge said at about 10:a.m., when the group got to the NPP’s Odododiodioo Constituency area, known as the "Blue Gate" around the High Street, a misunderstanding ensued between a group of young men who were in the "Blue Gate" area and some supporters of the  NDC participating in the health walk.

This, she said, resulted into the throwing of bottles and stones at each other, resulting in serious injuries to about 10 persons who were rushed to the hospital.

She said medical forms were issued to the victims of the attack for medical officer's report to assist the police in their investigations.

An eye witness account, however, had it that both parties planned their floats to take place yesterday.

It said in the course of their processions, the parties clashed, and in the midst of the confusion that erupted, they began pelting each other with stones and other missiles, resulting in injuries on both sides.