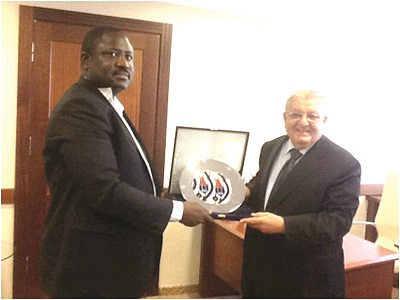 Eight Municipal and District Assemblies in the SADA Zone and the Madina Municipal Assembly have set up a ‘Sister-City Friendship Programme with selected Cities in Turkey.

Mr  Adam Abdul Nasser, the Managing Director of Planet Design Limited, who is the initiator and coordinator of the programme, announced this on arrival at the Kotoka International Airport in Accra with the delegation from Turkey.

Briefing the media, Mr Adam Abdul Nasser said that the visit was made possible by the Lord Mayor of Istanbul and Chairman of the Association of Mayors in Turkey, Dr Kadri Topbas, and the outgoing Turkey Ambassador to Ghana, Ambassador Aydin Nurhan.


The areas of co-operation for the ‘Sister- City Friendship, according to Mr Nasser, are economic (investment and trade), social (infrastructure development, human resource training, health, water and sanitation, etc) and cultural.

He further assured all the assemblies that as president of the Association of Mayors in Turkey, he would personally ensure that the ‘Sister- City Friendship’ established between the eight visiting cities from the SADA Zone and Turkey impacted positively on the development agenda of the assemblies.

The Istanbul Municipal Assembly eulogised Mr Nasser for his singular contribution to cementing the economic and social relationship between Ghana and Turkey in the last four years, and was presented an award making him an honorary citizen of the city of Istanbul.

At the office of the president of TASAM, Dr  Suleyman Sensor, Mr Nasser stated that the SADA zone was endowed with huge investment potential in agriculture, mining, construction, real estate, tourism and many more but also very poor less developed compared to the south of Ghana. However, to mitigate the poverty and bridge the development gap brought about by the slave trade, colonialist policy of denying the northern part of Ghana formal education and the necessary infrastructure, the Government of Ghana set up SADA to accelerate  development in the Northern part of Ghana.

According to Mr Adam Abdul Nasser, key to the acceleration of this development were the requisite investment financing and the critical human resource. He therefore requested TASAM to assist in developing the human resource potential of the SADA zone.

Dr Suleyman Sensor, President of TASAM, expressed his sincerest gratitude for receiving the delegation of eight district chief executives from Ghana, the first of its kind from Africa.

Dr Suleyman Sensor  said  TASAM would arrange a six-month scholarship for all the MMDCEs from the SADA zone to be trained in local government administration, starting from this year, and that a clear modality should be established for the implementation of this scholarship scheme.

Dr Suleyman Sensor also announced that TASAM would collaborate with relevant public institutions in Turkey to establish a scholarship scheme for qualified students in the SADA zone to study in Turkey in disciplines, including science and technology, agriculture, medicine, nursing and administration.

The Turkey Technical International Co-operation Agency (TIKA) proposed to collaborate with SADA to provide technical support and co-operation in areas of water and sanitation, health, agriculture, education and necessary equipment for small scale artisans. In pursuant to this, TIKA shall send a delegation to Ghana to hold further discussions in this regard.

The delegation finally held meetings with the Association of Businessmen and Industrialists in Turkey (TUSKON), a private sector grouping of businessmen and investors whose investments the delegation sought to attract to the districts.  The delegation also visited Basak Traktor and Alper Agricultural Machinery Company in Istanbul and Aydin. The companies signed a partnership agreement with Alnaks Automotive Company Limited to set up tractor and implement assemble plants in Buipe in the Northern Region.