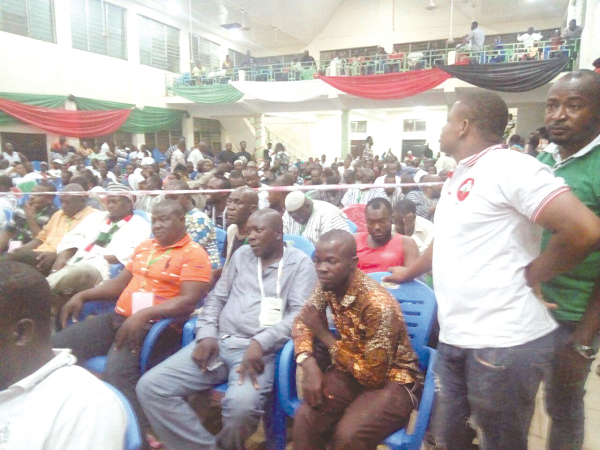 A marathon electoral process has produced new leadership for the National Democratic Congress (NDC) in the Wa Central Constituency of the Upper West Region.

The 19-hour process endorsed first time candidate Mohammed Sule as the new chairman for the constituency and gave the mandate of constituency secretary to Abu Salifu Tamaah, who replaced incumbent Abdulai Abass.

The Electoral Commission officer in charge of the polls, Mr Jackson Annoh, declared the final results at 3:42 a.m. on Sunday, with almost all of the 1,382 delegates, several observers and party sympathisers still packed inside the assembly hall of the Wa Senior High Technical School.

There was anxiety all along as the battle for the chairmanship became easily the biggest attraction among delegates, with four others challenging the favourite,  Mr Sule for the slot.

Sacrificing a night's sleep looked a justifiable cause for delegates, especially as the results ushered them into a higher notch of celebration as the sky began to open up to full morning.

The changeover of secretaryship was quite dramatic, Alhaji Abass having occupied the position for just a single term, but very few cared so much about the 437 votes difference his successor Mr Tamaah had over him.

"I invite contestants to come on board to assist in moving the party forward," the new chairman said in his maiden address after the swearing-in ceremony.

"This party belongs to us all, and the target is to make it stronger than now to achieve the collective aspirations of the members in the constituency," he added.

Sixty-one persons vied for 16 positions, with a further eight elected into executive positions.

The polls started on schedule, but the large number of delegates made the process quite laborious for both electoral officers and delegates.

Voting ended after 9 p.m., but sorting and counting lasted beyond five hours, but there was no sign of fatigue or frustration at the hall.

Samuel Duodu reports from Tamale that a total of 24,542 delegates from over 2,688 branches were expected to cast their votes in the NDC constituency elections in the Northern Region on Saturday and Sunday.

A total of 20 constituencies were to elect their leaders on Saturday while the remaining eight had theirs on Sunday, June 24, 2018.

Meanwhile, there was confusion at the constituency election of the NDC at the Sagnarigu Constituency in the Northern Region following an alleged over voting.

An officer from the Electoral Commission was accused of issuing multiple ballots to some delegates to vote for his preferred aspirant, reports  Mohammed Fugu.

This triggered a protest at the voting centre at the Tamale Technical University campus where the constituency election took place.

Already, the election could not start  as scheduled as a result of some unresolved issues. Following the confusion, proceedings ended abruptly.

Security personnel who were supervising the election took the ballot boxes away to prevent further disturbances.

Daily Graphic`s reporter, Mohammed Fugu who was at the centre had his mobile phone seized and was manhandled by some party foot soldiers for about 20 minutes in a move to prevent him from capturing the incident.

A joint military and police team were deployed to ensure calm.

The election at the Tamale North Constituency also came to a standstill following the appearance of a picture of the former constituency chairman on the ballot paper even though he was not contesting.

The election, however, went on smoothly in other constituencies in the Northern Region.

Over 24,000 delegates took part in the NDC constituency elections in the Northern Region.

The newly elected Chairman of the Wa Central NDC, Mr Mohammed Sule addressing the media after his victory

From the Western Region, Dotsey Koblah Aklorbortu reports that the NDC constituency elections went on smoothly in 24 out of the 26 constituencies in the region.

According to the Regional Director of the Electoral Commission (EC), Mr Steve Opoku-Mensah, a total of 27,177 delegates voted for 1,043 contesting candidates.

He said elections in the Amenfi East and Central constituencies were postponed because they were not ready.

Information available to the Daily Graphic indicates that the election in the Amenfi Central will be held on June 30, 2018, while Amenfi East would be announced later.

Even though many of the constituencies did not start on schedule, all delegates were able to go through the process as voting travelled throughout the night till dawn on Sunday.

At the end of proceedings, the election of constituency chairmen and vice chairmen, secretaries, organisers, women organisers, treasurers, communications officers and their deputies, as well as representatives of the zongos, took place.

Vincent Amenuveve also reports from Bolgatanga that more than 11,439 delegates from over 1,241 branches of the National Democratic Congress (NDC) in the Upper East Region elected their constituency executives last Saturday.

The remaining two constituencies that did not hold elections are Bolgatanga Central and Navrongo Central.

The exercise was generally peaceful except for a few electoral issues in the Talensi and Builsa South constituencies.

Speaking in an interview with the Daily Graphic after the exercise, the NDC Regional Secretary, Mr Donatus Akamugre, intimated that the party was compelled to nullify and re-run the elections for the position of the women's organiser in the Talensi Constituency because of over voting.

In the Builsa South Constituency also, he noted that results for the position of constituency secretary was not declared as it got dark but stated that it would be done.

According to the NDC Regional Director of Elections, Mr Issaka Haruna, elections were not held in the Navrongo Central Constituency due to feverish preparations going on for the final funeral rites of the late Paramount Chief of Navrongo, Navro-Pio Pe Asagipare I.

In the Bolgatanga Central Constituency, the issues were described as purely an internal matter.

Touching on reports that an injunction had been placed on the elections in the Bongo Constituency, Mr Haruna, who is also the Deputy Regional Organiser of the NDC, indicated that so far he had not been served with any letter to the effect that elections should not be held in Bongo "and so the party went ahead with the elections".

He also stated that the reports about a misunderstanding between one of the aspirants in the Zebilla Constituency and delegates had been resolved by the executives of the party in that constituency.

The new officers are expected to steer the affairs of the party in the region for the next four years.