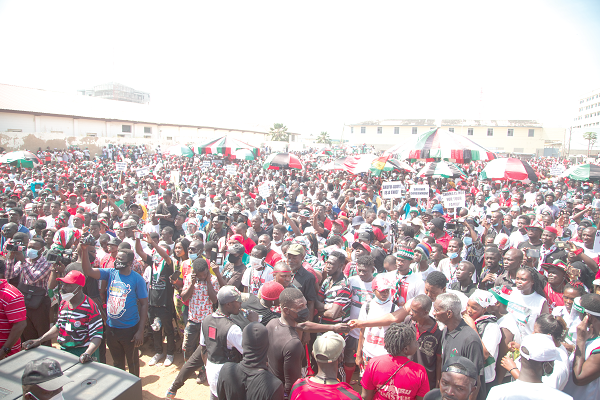 Hordes of National Democratic Congress (NDC) supporters yesterday took to the streets of Accra to protest against what they described as corrupt activities of the government.

Dubbed: “Yegye yen sika”, to wit: “We are retrieving our money”, the demonstration started at the Kwame Nkrumah Interchange, where hundreds of party supporters had converged, about 8 a.m.

Clad in party colours, the supporters paraded through some principal streets of Accra, amidst singing and dancing to party songs.

They held placards with inscriptions such as: “Agyapa thieves”, “We want our stolen monies”, “PDS thieves”, “Ghana is not for your family” and “419 government”.

Some party executives were present to lead the demonstrators to ensure the success of the exercise.

Among party bigwigs who participated in the protest were the National Chairman of the NDC, Mr Samuel Ofosu Ampofo; the Director of Elections, Mr Elvis Afriyie Ankrah, and the National Communications Director, Mr Sammy Gyamfi.

The protesters were accompanied by the police to ensure peace and orderliness in the process.

Speaking after the march, the General Secretary of the NDC, Mr Johnson Asiedu Nketia, claimed that the Akufo-Addo administration was swimming in corruption.

Making reference to a government statement urging the people to be careful of fake news, propaganda and political spinning in the last days to the general election, he said the party did not need any fake news to prove that the government was corrupt.

He added that a report by the former Special Prosecutor, Mr Martin Amidu, had vindicated the NDC on its assertions that the NPP administration was corrupt.

“He Amidu resigned because he could not withstand the high levels of corrupt activities happening under this government,” the said.

Mr Nketia, therefore, urged the people to vote massively for the NDC to save the country from the prevailing corruption by the government.

“This year’s elections will not be any ordinary elections but a communal labour to clear all the filth the government has created within its four-year tenure,” he said.

Mr Gyamfi also alleged that because the government lied its way to power, it had not been able to fulfill most of the promises it made in the 2016 elections.

Rather, he said, it had developed an appetite for borrowing, which had doubled the national debt.