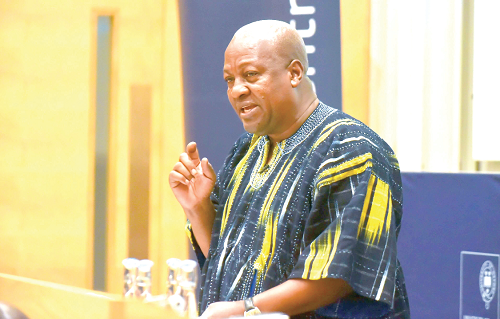 The National Democratic Congress (NDC) will on Tuesday, organise a Town Hall Meeting in the Ashanti regional capital, Kumasi, to explain its policies and programmes as contained in its Election 2020 manifesto.

A statement signed by the National Communications Officer of the party, Mr Sammy Gyamfi, said the Town Hall Meeting would be addressed by the flag bearer of the party, Former President John Dramani Mahama.

“The event, which will afford the party an opportunity to break down and explain the transformational policies and programmes contained in its 2020 Manifesto, will also be held in the other regions.

“The NDC assures the general public that we intend to take the People’s Manifesto to the doorstep of every Ghanaian, embark on the rescue mission to create jobs and prosperity for all, and restore Ghana back on the path of development and true progress,” the statement added.

The biggest opposition party launched its Election 2020 manifesto known as the ‘People’s Manifesto’ on Monday, September 7.

The highlights of the manifesto include making the Free SHS more inclusive to cover students in private senior high schools as well as abolishing the double track system, and introducing Free Technical and Vocational Education and Training through apprenticeship programmes.

The manifesto also promises putting the economy back on track to work for all the people, while controlling the public debt and salvaging the long-suffering cedi.

The next NDC government, Mr Mahama said, would also exempt small businesses from income and corporate income tax to enable them to re-inject their profits, estimated about GH¢1.4 billion a year, into their operations.

Corporate taxes for medium businesses will also be reduced from 25 per cent to 20 per cent for two years, while startups in the first year of operation will be exempted from tax, while those that employ up to 20 people will enjoy the tax holidays for two years.

While the manifesto plans to promote local content for local contractors in all sectors of the economy, the NDC government will also pay the full amount of every victim of the “reckless collapse of financial institutions”.

The NDC said it would legalise commercial use of motorbikes, also known as ‘Okada’.