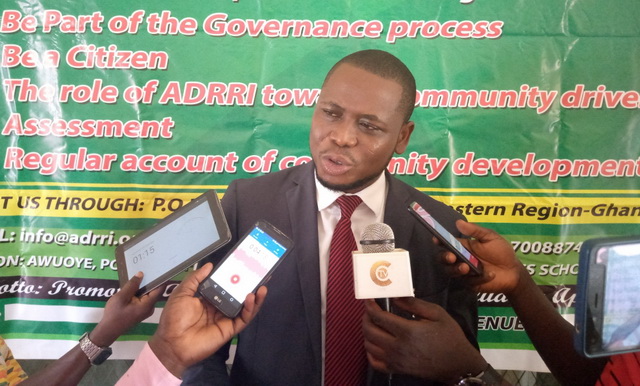 A report by the Africa Development and Resources Research Institute (ADRRI) has established that the 2020 manifestoes of the two major political parties, the New Patriotic Party and National Democratic Congress, lack extensive consultation in gathering relevant needs of citizens.

The report established that both the National Democratic Congress (NDC) and the New Patriotic Party (NPP) made some engagement with certain professional bodies in putting together their manifestoes, however, they could not cover average percentage of Ghanaians.

Presenting the report at6 the Koforidua Technical University, the Executive Director of ADRRI, Dr Jamal Mohammed revealed that the result indicated that though consultation was woefully inadequate, the NDC consulted more Ghanaians than the NPP with percentage score of 39 and 13 respectively.

Speaking to journalist in an interview, Dr Mohammed urged political parties to be broader in their consultations to make sure that the necessities of various districts and communities were captured in their manifestoes for inclusive governance and to promote development.

He appealed to government to be very deliberate and engage citizens before siting projects in any community as developmental projects “are demand driven”.

Education and infrastructure which have been at the centre of both parties social contracts were highly scored in measuring the perception of Ghanaians on certain key thematic areas in the respective manifestoes.

A perception index in the report indicated that 71.6 percent of Ghanaians perceived that the NDC would be able to fulfill their manifesto promises in the educational sector with major policies such as “expansion of Free SHS to include Private Schools; abolish double-track system; absorb 50 percent fees for university students, provision of free tertiary education for people living with disabilities, and extending education access by giving many Ghanaians opportunity to obtain legal education” if elected.

Also, 55.58 percent of Ghanaians perceived that the NPP if re-elected, would be able to fulfill promises such as “increase the man power resources needed to enhance the implementation of the Free SHS, ensure no student is denied admission to a tertiary institution due to inability to pay fees, implementation of US$216 million account to improve the quality of education in 10,000 low performing basic schools across 260 district, and implementation of a comprehensive National Teacher Policy and Digital Literacy Project for teachers”.

On promises made by the two parties on tackling climate change and impact on agriculture in the 2020 manifesto, the NDC had 77.85 percent and the NPP on the other hand had 56.60 percent Ghanaians having confidence in their promises in enhancing agricultural growth and productivity.