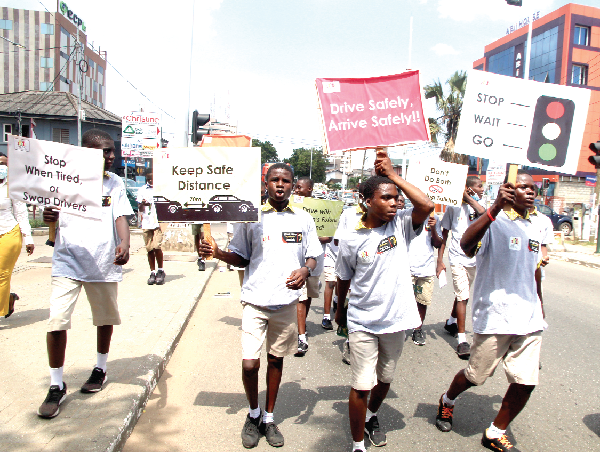 Some schoolchildren embarking on a street campaign for road safety. Picture: ESTHER ADJEI

The Korley Klottey Municipal Office of the National Commission for Civic Education (NCCE) has launched a campaign to eliminate road crashes and carnage, especially during the Christmas and New Year festivities.

Dubbed: “Save a Life Road Safety Campaign”, it is expected to record zero road crashes in the municipality that covers areas such as the Kwame Nkrumah Circle, Adabraka, Osu and adjoining areas.

Being conducted, in collaboration with the National Road Safety Authority (NRSA) and Street Sense, an organisation dedicated to ensuring road safety, the campaign to rid the roads of crashes and related deaths will reach out to all 13 lorry stations and taxi ranks across the municipality.

This initiative will be focused on regular public education, face to face interaction with targeted groups and street announcements to cover 200 major streets within the municipalities to achieve a record of zero road crashes during and after the festive season.

The Korle Klottey Municipal Director of NCCE, Mr Stanley Addo, said the main objective was to educate motorists and other road users on road safety and to save lives.

He said public education and sharing vital information with which the citizens could enrich their lives was part of the NCCE’s mandate.

Mr Addo stressed that it was part of their responsibilities to reach out to the public to avoid reckless driving on our roads.

The Regional Director of the NCCE, Ms Lucille Hewlett Annan, also advised motorists to adhere to road regulations to eradicate the crashes on the roads during the festive season.

The Head of Corporate Affairs of the NRSA, Mrs Pearl Adusu, stated that road crashes remained a national issue and that within 10 months of the year, the country had recorded 2,330 deaths from road crashes, which exceeded the number of recorded COVID-19 deaths of 1,206 since the outbreak of the pandemic in 2020.

She further noted that Accra alone recorded 555 road crashes, representing 23.32 per cent of the cases recorded.

Mrs Adusu explained that the NRSA was committed to all road safety campaigns which included the recently launched, “Stay Alive” campaign which was also aimed at reducing road traffic crashes.

“We are always ready to collaborate with you and other stakeholders to educate and sensitise the public to road safety issues”, she said.

Also in attendance was the Municipal Chief Executive of Korle Klottey Municipal Assembly, Mr Nii Adjei Tawiah, who launched the campaign and cautioned pedestrians to use the pavements to avoid the incidence of road crashes.

He gave an assurance that in a month’s time, the crowded pavements would be freed as the “Operation clear your frontage” was making headway to clear pavements for the use of pedestrians to help reduce road accidents.

As part of the campaign, there will be an educational carnival from Accra Central through to the independence square to create awareness and sensitise the public to road safety regulations and precautions.