A performance audit report by the Auditor-General on the administration of scholarships by Ghana Education Trust Fund (GETFund) has revealed the names of some ministers and government appointees who have benefited from the scheme.

The names of the Minister of Education, Dr Matthew Opoku-Prempeh, the Minister of Procurement and Deputy Majority Leader in Parliament, Ms Sarah Adwo Safo as well as the Executive Secretary of the National Council for Curriculum and Assessment (NaCCA), Prince Hamidu Armah are among the list.

Mr Mathew Opoku Prempeh is listed as studying National and International Security at Harvard University, receiving $12,800 for living expenses and $11,200 as tuition fees.

Ms Sarah Adwoa Safo is also listed as studying at the Harvard Kennedy School enjoying $12,800 in allowances with $17,004 in tuition fees.
Armah on his part studies Philosophy in Education at the University of Aberdeen, which comes with a benefit of £38,400 for living expense in addition to £33,000 for tuition fees.

However, GETFund in a press statement has explained that the three were not awarded scholarships under the current New Patriotic Party (NPP) administration.

“The aforementioned persons have not been awarded scholarships by the Fund under the current administration,” the statement said.
There has however, been some public discussions that even if they were not awarded to them under the present administration, there was the public thinking that, such scholarships were meant for needy students but responding to that assertion, GETFund explained that its mandate was not limited to serving needy but brilliant students, in line with the GETFund Act 2000.”

Meanwhile, Dr Mathew Opoku Prempeh on his part has confirmed receiving scholarship from GETFund in 2014 to participate in a 3-week certificate programme at the Kennedy School of Government, Harvard University.

“I have noted with dismay a news carried by some media, that suggests that I have as a Minister, received a scholarship from the Ghana Education Trust Fund for studies at Harvard.”

“This impression is false and calculated to cause embarrassment and public ridicule. I have not received any form of sponsorship for any program or course of study from GETtfund of scholarship secretariat since becoming a Minister.”

“However, I have been e recipient of GETfund award in 2014 to participate in a 3-week certificate program at the Kennedy School of Govt, Harvard University.”

“I urge the public to disregard this story, borne out of mischief and lies, intended to cause disaffection. “

Below is a copy of the GETFund statement on the issue: 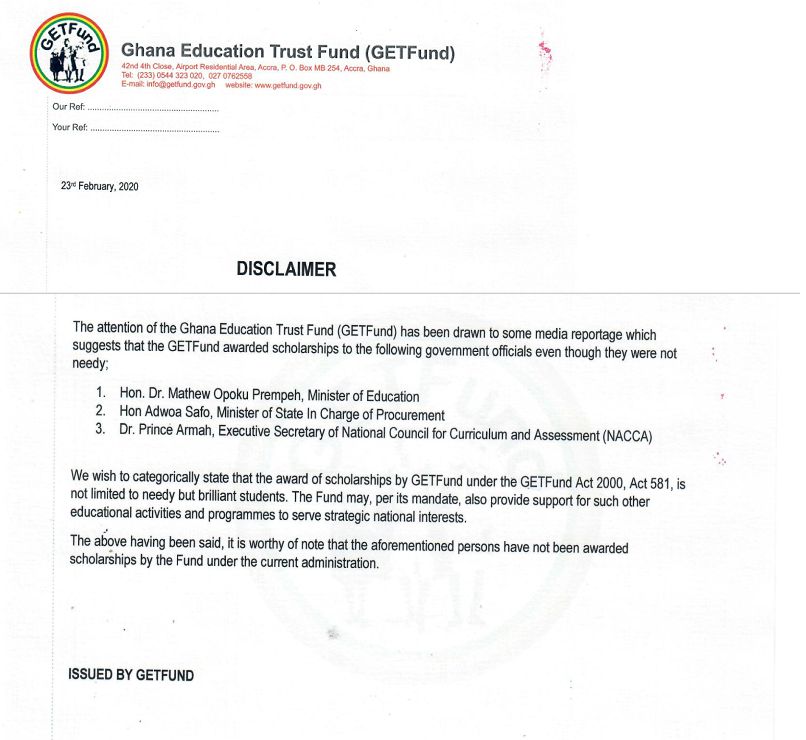