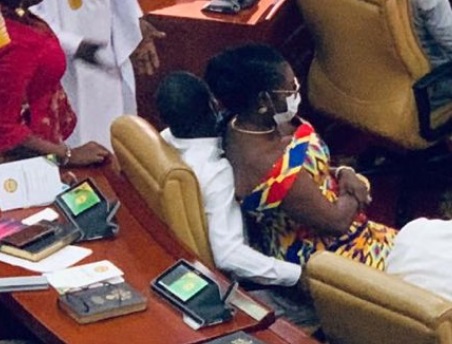 My wife should be complaining not her husband - Mintah Akandoh to Ursula
30.5k Shares

The Member of Parliament (MP) for Juaboso, Kwabena Mintah Akandoh has disclosed that he did not consent to his colleague MP Mrs Ursula Owusu-Ekuful sitting on his laps in the Parliamentary Chamber on Thursday morning.

According to him, his wife has not yet commented about the incident which set tongues wagging on social media but he is stressing that he is not to blame.

This incident took place dawn Thursday amidst confusion in the Parliamentary Chamber during the early hours of Thursday.

It followed a row over sitting arrangement and where MPs-elect were to sit.

My husband is on self-quarantine, we leave food at the door for him - Ursula

There was confusion in the Chamber over which party had the majority and this resulted in MPs from the National Democratic Congress (NDC) side occupying seats meant for the majority. When the New Patriotic Party (NPP) MPs walked in, they had no choice but to occupy the minority section.

Stating his version of events on how the Ablekuma West MP landed on his laps, Mr Akandoh said Mrs Owusu-Ekuful refused to sit with her party and moved to the NDC side.

“We sat at the majority side, the right-hand side of where the speaker sits. So when they came in, all of them moved to the minority, the left side and sat down. Ursula refused to go to that side,” Mr Akandoh told Joy News in an interview.

He said when Mrs Owusu-Ekuful got up from the seat to go to the bathroom, he went to occupy that seat.

“She sat on my lap. I didn’t sit on her lap. My wife should be complaining and not her husband.”

He added that he didn’t want to touch her to avoid “meeting her with a little force.”