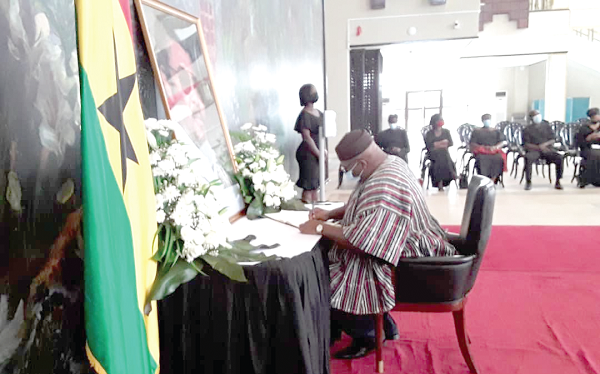 Books of condolence in memory of the late former President Jerry John Rawlings have been opened in all the 16 regional capitals to give people in those areas the opportunity to sign them.

The move is to prevent people from travelling to Accra to sign the book in honour of the former President who died last Thursday at the Korle-Bu Teaching Hospital after a short illness.

"We have similar books in the regions, so people can go to the regional coordinating councils to sign them. There is no need travelling to Accra to do that," the Head of Protocol at the Office of the Vice-President, Enoch Nana Osei-Mensah, told the Daily Graphic in Accra yesterday  on the premises of the Accra International Conference Centre where a book of condolence had been opened for the late President.

Meanwhile, retired heads of security agencies and members of the Old Achimotans Association yesterday visited the AICC to sign the book of condolence.

Mr Allotey told the Daily Graphic that the late former President was a very affable and down-to-earth person who mixed very well with the other ranks of the Ghana Armed Forces although he was the Commander in Chief when he was President.

"I was thankful when he chose me to be his aide-de-camp," he said.

To sign the book of condolence yesterday was the President of the Seventh Day Adventist (SDA) Church, Pastor Dr Thomas Techie Ocran, who said Rawlings was always passionate about what he wanted to do.

"His name will always be remembered," he said.

For the President of the Old Achimotans Association, Prof. Ernest Aryeetey, students of the school were normally taught how to serve humanity and that was exactly what the late former President did.

Meanwhile, the Foyer of the AICC has been adorned with pictures depicting the various lifestyles of the former late President. The pictures came with various captions, some of which read: "The soldier's soldier", "an icon of tradition", "a phenomenal leader", "the people's choice", "the builder of connections", "an outstanding personality", "a true soldier", "a lover of culture", among others.

The signing of the book of condolence for the former President opened last Friday, with President Nana Addo Dankwa Akufo-Addo and Vice-President Dr Mahamudu Bawumia signing it.

More dignitaries, including heads of the security agencies and religious bodies, also took turns to sign the book of condolence last Tuesday at the Accra International Conference Centre.