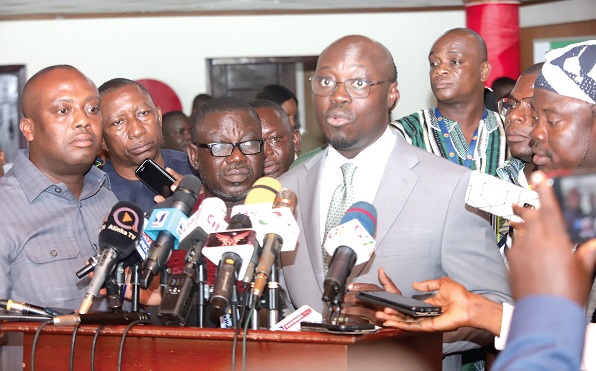 The Minority in Parliament has described the 2023 budget statement and economic policy presented by the Minister of Finance, Ken Ofori-Atta, yesterday to Parliament as not encouraging as it provides no hope for the youth because there will be a freeze on employment.

It has, therefore, urged the citizenry to brace themselves up for a "maximum hardship" in the coming year worse than the days of 1979 and 1983.

It contended that the budget provided nothing but unbearable hardship to the citizens.

Reacting to the budget dubbed "Nkabom", the Minority spokesperson on Finance, Dr Cassiel Ato Baah Forson, said the budget provided no hope for the youth in particular because there would be a freeze on employment.

Beyond that, he said, the reduction of the controversial E-Levy headline rate from 1.5 per cent to one per cent of the transaction value, as well as the removal of the daily threshold meant that the exceptions that citizens used to get would be taken away.


"This means that Ghanaians would start paying taxes on the little money they send, including even GH¢10,” he said.

"The budget provides no hope for the youth, traders and everybody because taxes will go up," Dr Forson said.

He said for the minister to admit that there would be some form of debt restructuring following the negotiation with the International Monetary Fund (IMF) indicated that President Nana Addo Dankwa Akufo-Addo was not honest with Ghanaians when he said "there will be no haircut."

"The only debt that will not be part of the restructuring will be Treasury Bills. This means that all external debts, including Euro bonds, will get a haircut," he added.

According to him, the budget would present severe and extreme austerity in 2023.

The Spokesperson said the budget was mere grammar because it failed to attach appendixes where the actual numbers could be found for critical analysis.

"Indeed, the Ghanaian economy is in an intensive care and the kind of dozes presented will only lead to our death," he added.

Dr Forson, who is also the National Democratic Congress (NDC) Member of Parliament (MP) for Ajumako Enyan Esiam Constituency in the Central Region, said the new taxes introduced would increase the statutory rate to 21 per cent but the effective rate would be 22 per cent.

"This is scary. The minister failed to tell us how the government’s expenditure will be cut. The things he (Finance Minister) introduced are empty for he did not outline the proper expenditure," he said.

Adongo
The NDC MP for Bolgatanga Central, Isaac Adongo, contributing to the presentation said at the time that families were struggling to keep themselves together; the government had put its hands in the pockets of the ordinary people to take twice as it took in 2022.

He said ordinarily, one expects the government to reduce expenditure so that the little it raised, it would be able to manage it to get out of the difficulty.

“Unfortunately, it has resorted to cutting expenditure on dairies and hampers, is that what we want? he asked.

He questioned the rationale behind increasing expenditure from GH¢109 billion to GH¢205 billion.

"Doubling expenditure by 88 per cent in a time that the economy is in trouble is baffling," he said.

"Next year will be three consecutive years that the government has financed a deficit that is 50 per cent of its total revenue," he added.

Earlier in the chamber seconding the motion for the adjournment of the House, the Minority Leader, Haruna Iddrisu, said Ghanaians had heard the Minister of Finance declare Ghana as a high debt distressed country.

With such a declaration, he described the budget as ‘Eka mpe dede budget’ to wit ‘debt doesn’t like noise’ with which the minister had put the country on the path to debt restructuring which he had announced as a debt exchange programme.

“So Mr Speaker, this budget is ‘Eka mpe dede’ budget because he has announced debt restructuring in the name of a debt exchange programme,” he said.

He said his expectation of the minister was for him to regularise his borrowing under the amended Bank of Ghana Act, 2016.

He urged the Finance Minister to come back to the House to seek the mandate and authorisation for “your excessive borrowing from the Bank of Ghana”.

The leader drew the House’s attention to the conspicuous lack of pomp and circumstance during the budget presentation.

“Even they (Majority MPs) are not happy and that explains why the Finance Minister is unaccompanied by the Vice-President.

He said the Finance Minister had only confirmed that Ghana’s economy was now on life support, which could trigger two things—recovery and the unknown.

"He has our prayers that we will help him to recover the economy,” he stated.