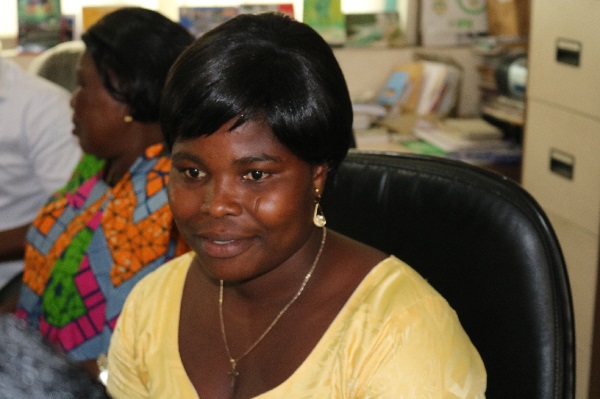 The Founder and Leader of the Ghana Freedom Party (GFP), Madam Akua Donkor, demonstrated her commitment and ambition to contest in the December 7 presidential election by taking a step to introduce her running mate, Mrs Patricia Asante, a 32-year-old farmer, to the Daily Graphic.

She said the Daily Graphic platform provided enough visibility for her running mate, just like the public unveiling of the running mate.

In an interview, Mrs Asante, a cocoa and food crop farmer at Huni Valley, Amoana Tarkwa in the Western Region, said she was committed to working with her leader for the attainment of the goals and ambitions of the party, that greatly focused on the goals of developing the education, health and agriculture sectors of the economy.

Married with four daughters, Mrs Asante, also known as Yaa Asante, who is a junior high school graduate, has been farming for the past six years.

She said the fact that she was not educated to a higher level did not deter her, nor her leader, known not to have had any formal education, from contesting in the December polls, since their party was for ordinary Ghanaians, and was committed to making education free from the basic to the secondary level, when elected into office.

She added that the GFP ticket aimed at promoting that goal, because the party had realised that a number of children were unable to access basic and secondary education as a result of financial constraints, hence their commitment to address that challenge.

She also said the party would establish a free zone at the port of Tema to attract more businesses by waiving taxes on imported goods.

Mrs Asante mentioned that roads to farming communities would be rehabilitated to open up food-growing centres to marketing areas to improve accessibility and improve the living standards of farmers, who produce to feed the nation, and for export to earn foreign exchange.

According to Mrs Asante, education on safe farming practices and promotion of good farming methods would be intensified to avoid the spraying of food crops with chemicals that caused damage to crops and affected the health of consumers.

She also indicated that though the party’s headquarters was situated at Kabu in the Eastern Region, that did not deter them from ruling the nation, since the start of a political party was a stepping stone to becoming a president.

The running mate of the GFP advised all women with the vision and mission to enter into politics not to allow anything to deter them from pursuing such a goal, but continue to pursue their aspirations without fear, since, according to her, “We are all Ghanaians and we should participate in elections with one ear and one mind.”

She said she would collaborate with her leader in all aspects of the electioneering, to ensure that the party wins the presidential slot, stressing that all women should support her leader, who had demonstrated beyond all reasonable doubts that she would emerge victorious out of the 17 candidates contesting the December polls.

For her part, Madam Akua Donkor said she selected her running mate, who hails from the same community with her, because she was convinced that she was best fitted to support her in the campaign for the party to win the elections, and was also satisfied that she (Mrs Asante), had all the capabilities to occupy the position of vice-president and perform her duties effectively if the party wins the election.

Barring any disqualifications, 17 candidates are billed to appear on the ballot paper for this year’s presidential election.

This follows the submission of completed nomination forms by flag bearers of 15 political parties and two independent candidates last Friday.

The Chairperson of the Electoral Commission (EC), Mrs Charlotte Osei, addressing the press after the close of nominations last Friday, said the submission of the forms to the EC was not automatic qualification for the aspirants to contest the December polls.

She said the commission would vet all the nominations to satisfy itself that all the eligibility criteria had been adhered to by all the political parties and the aspirants.