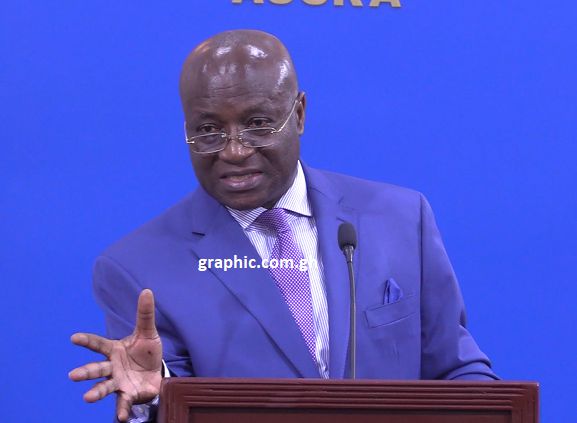 The leadership of Parliament has denied media reports suggesting that some Members of Parliament (MPs) and parliamentary service staff have tested positive for the coronavirus disease (Covid-19).

They have consequently asked for a retraction of the report published by Starr FM.

The media report published Tuesday, May 26, 2020 suggested that two MPs and 13 staff of the lawmaking chamber have tested positive for Covid-19 after results of voluntary testing requested by the Speaker trickled in.

It added that following the development, the Speaker has ordered for mandatory testing of all staff and MPs as a move to ensure effective contact tracing since MPs interact among themselves often.

But reacting to the publication at a press conference Tuesday afternoon [May 26, 2020], Mr Kyei-Mensah-Bonsu denied and said the leadership of the House was not aware of anything of that sort.

"...anybody who tested positive, the information will not be transmitted to all of us. It is between the person and the people who did the test. Some confidentiality is required in these matters and we needed to be very circumspect."

"The reason why we decided to do this, as I sit here, ...if Kate [Addo - Director of Public Affairs at Parliament] has tested positive, I wouldn't know, if the Clerk [of Parliament] has, if I [Kyei-Mensah-Bonsu] have, they wouldn't know. So it is part of the agreement that we all came to, so nobody knows whether anybody has tested positive. The people who will know will be perhaps, those of them who did the test."

"So just to emphasise the point that what that medium [media house] has done, amounts to nothing but speculation. They are only speculating that two Members have tested positive. Its speculative journalism. We would want to let you know that there is no truth in that."

"...As Speaker indicated, because we are all here together, we are appealing to all staff in the House, all Members of Parliament and even non staff as you are [parliamentary media personnel] that everybody must subject himself or herself for your own sake and for the sake of your households, your friends and others that you come into contact with at work places and the various houses so that we are able to protect ourselves as a family within the prescints of Parliament."

"So that is how it is, the agreement was that if anybody's results came out positive, it will only be known to that person, be a staff, journalist or a Member of Parliament. I don't know, the Clerk to Parliament doesn't know, the Director of Public Affairs wouldn't also know, so I will plead with you not to be engaging in such unhallowed speculative journalism.

It becomes difficult when you want to invite people to be here to submit themselves, if you go out there and be engaging in such speculations... it is not worthy to be engaging in that exercises. You may be succeeding unconsciously in repelling people, by discouraging people to submitting themselves, and yet we need these things for the survival of Parliament as an institution... so lets be circumspect," Mr Kyei-Mensah-Bonsu said.

The Director of Public Affairs at Parliament, Kate Addo said the media report has created a situation of "panic amongst us."

"As we sit now, this is very uncomfortable for us and it has created a lot of panic amongst us because we know what one person being infected in an environment like this means."

"We recognise that media houses do have their sources and may have spoken to persons outside of Parliament but we also do want to state that as an institution we are very cautious .. and such reports tend to create fear and panic and we will like that the respected station will retract and come to us, we are ready to give them whatever information that we have and if they have very concrete information they will put it out so that we will have our peace of mind."