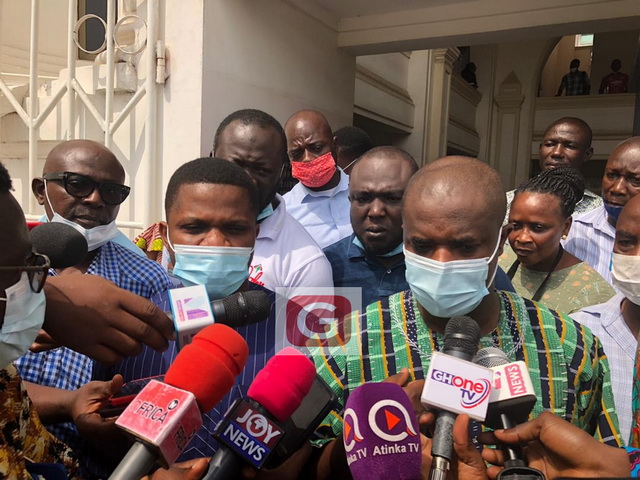 The Presidential Candidate of the National Democratic Congress (NDC), Former President John Dramani Mahama, has filed a petition at the Supreme Court seeking the annulment of the declaration of President Nana Addo Dankwa Akufo-Addo as the President-elect by the Electoral Commission.

The petition which has been sighted by Graphic Online is also seeking an order of injunction restraining President Akufo-Addo from holding himself as the President-elect.

Former President Mahama is also asking the apex court to order the EC to conduct a second election with only him and President Akufo-Addo as the candidates.

Mr Sammy Gyamfi (2left), National Communication Officer of the NDC and Mr Edudzie Tamakloe, one of the counsels for the petitioners, arrived at the Supreme Court at about 12:13pm to file the process. Pictures : Samuel Tei Adano

Other reliefs sought by the former President include a declaration that the Chairperson of the EC, Mrs Jean Mensa, breached the 1992 Constitution, specifically Article 63(3) with the declaration that she made on December 9, 2020.

Also, the former President is asking the highest court of the land to declare that based on the data contained in the declaration “no candidate satisfied” the more than 50 per cent threshold required to be declared a winner of the presidential poll.

He also wants a declaration from the court that that the said declaration of President Akufo-Addo as the President-elect by the EC is “unconstitutional, null, void and of no legal effect”.

The petition was signed by former President Mahama, with the lawyer on record as Mr Tony Lithur.

Mahama’s case
In his petition, the former President argues that the results announced by Mrs Mensa on December 9, 2020 did not give any candidate the more than 50 per cent threshold.

It is the case of Mr Mahama, per the figures, that the actual percentage for President Akufo-Addo minus Techiman South ought to be 50.098 per cent and not 51.595 per cent.

Also he argued that his percentage minus Techiman South should be 46.26 per cent and not 47.366 per cent.

From that, the NDC Presidential candidate says that it was erroneous for the EC to state that even if all the votes in Techiman South were added to his votes it wound not change the results.

“Consequently, if all the votes of Techiman South Constituency were added to the Petitioner (Mahama)’s votes , the 2nd respondent’s (President Akufo-Addo) votes will remain the same at 6,730,413, now yielding 49.625 per cent , while the votes of the petitioner would increase to 6,342,907, now yielding 46.768 per cent.

“Therefore Mrs Jean Adukwei Mensa’s claim in the purported declaration that adding all the 128,018 votes in Techiman South Constituency of the votes standing to the name of the petitioner would not change the results, was clearly wrong,” Mr Mahama argued.