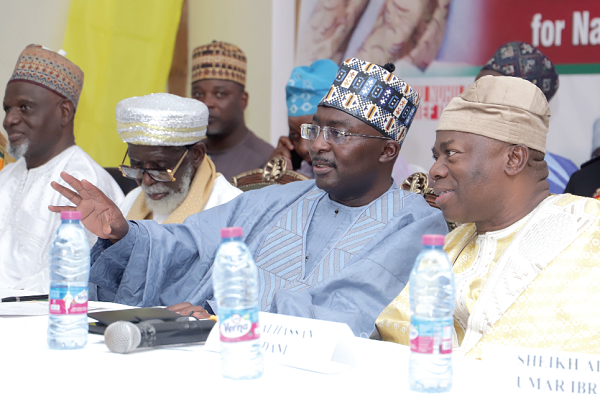 The Vice-President, Dr Mahamudu Bawumia, has said efforts must be made to sustain the prevailing peace and harmony in the country for accelerated development.

He said the exclusion of any group of people in any form, be they Muslims or Christians, must not be encouraged.

“We are one people, with a common destiny, and the country will be the one to suffer if some communities grow and leave others behind,” he added.

The Vice-President was addressing the second National Muslim Conference at the National Mosque in Accra last Thursday on the theme: “Towards a coherent and holistic empowerment strategy for national development — The Ghanaian Muslim Ummah in context”.

He said for the government, breaking the development gap between less-privileged communities and others was important for the overall growth of the nation.


“I am happy about the new wave of development being championed by the National Muslim Conference because it will contribute significantly to address the challenges of unbalanced growth and development in Zongo communities, compared to other communities,” he added.

Instituted on September 1, 2021, the conference was conceived when some Muslim students of the Wesley Girls’ High School in Cape Coast had difficulty going through the Ramadan fasting because the school authorities claimed the practice flouted school regulations.

On the bases of that, the Muslim Caucus in Parliament conceived the idea to bring on board all Muslim sects in the country to chart a new course to impact national policies, especially in the areas of education, health, finance and economic empowerment.

Dr Bawumia urged all Muslims to uphold the ideals and goals of the conference to ensure it succeeded in contributing meaningfully towards the development of the country.

He further called for increased inter-faith dialogue, as well as inter-faith engagements between Muslims and their Christian counterparts to proffer solutions to challenges facing the country.

Tracing the history of Muslims in the Gold Coast to as far back as 1932, the Vice-President said Muslims were alive to their responsibilities, for which they got involved in politics in the early 1950s, leading to the formation of the Muslim Association Party in 1954.

“The sight of the National Chief Imam in a chapel to exchange pleasantries with Christian leaders and a Christian President teaming up with a Muslim Vice-President are some of the beautiful examples of what Muslims and Christians can do together at our workplaces, in our communities and the nation once we continue to tolerate each other and show respect to our religious diversity,” he said.

Dr Bawumia commended the National Chief Imam, the leadership of Muslim sects and the Muslim Caucus in Parliament for identifying ignorance, poverty and diseases as the common enemy and coming together under the conference to work towards addressing them.

The National Chief Imam, Sheikh Osman Nuhu Sharubutu, urged the people to be thankful to God for the peace and unity in the country.

The Chairman of the Muslim Caucus in Parliament, Alhaji Mohammed Muntaka Mubarak, called on Muslims to support national development.

Alhaji Mubarak, who is also the Minority Chief Whip in Parliament, urged members of the conference to let the fear of God guide them in their work.