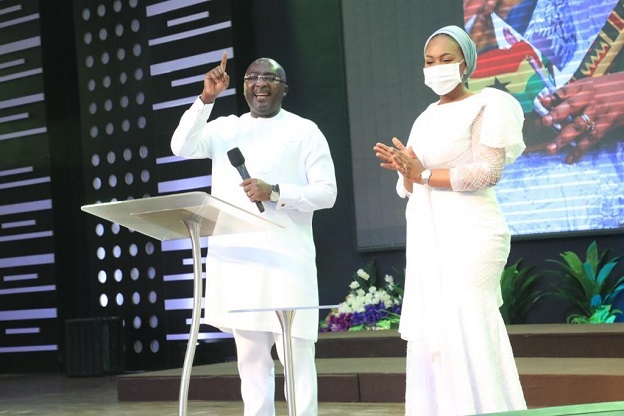 Vice-President Dr Mahamudu Bawumia has called on Ghanaians not to take for granted the unity and peace the country is enjoying.

He said despite the tribal, religious and ethnic diversity, the country remained indivisible and so it must continuously guard jealously the existing unity and peace.

“For us as a country, we have come a long way and had a history of peaceful coexistence among ourselves despite the diversity of tribes, religion and ethnicity. Even in our diversity, we have always remained indivisible and what we have in common are in excess of what divides us.

“It is this love for each other, underpinned by the biblical love your neighbour as thyself, that today Ghana is rated as the most peaceful country in West Africa and we thank God for that,” the Vice-President stressed.

Dr Bawumia gave the advice when he addressed the Christmas church service of the Victory Bible Church International (VBCI) at Awoshie in Accra, December 25, 2020.

The visit to the church, according to Dr Bawumia, was his first church appearance after the December 2020 Presidential and Parliamentary elections and that it was not by coincidence that after the victory for the New Patriotic Party (NPP) in the December elections “we are worshipping at the Victory Bible Church”.

Dignitaries
The Vice-President was accompanied to the church service by his wife, Mrs. Samira Bawumia, the Chief Executive of the Bui Power Authority, Mr Fred Oware, the Board Chairman of GOIL, Mr Kwamina Bartels, a Deputy Minister of Health, Dr Bernard Okoe Boye, the National Organiser of the NPP, Mr Sammy Awuku and some Members of Parliament of the NPP, including the MP- elect for Ablekuma North, Ms Sheila Bartels.

Love
Quoting from Mathew 22:37-39, Dr Bawumia urged all “to love God and to love thy neighbour as thy self”, saying the sustenance of the unity and peace of the country over the years was a feat that was well deserved and accomplished and should not be taken for granted because it is only by the grace of God that there is peace in the country.

He shared his experience and that of President Akufo-Addo when they lost the 2008 presidential elecrion and said that i"It was not always easy when you lose an election but even though we lost by just 40,000 votes in 2008, we prioritized the peace and sanctity of the democracy of the country.”

“We lost one, just by 40, 000 votes in 2008 but we prioritised the peace and sanctity of our democracy and conceded, so I am very much convinced that the Lord who granted us the willpower to prioritise national cohesion, peace and tranquility over personal gratification is capable and will do the same for us,” he stated and called on Ghanaians to avail themselves to be used by God as instruments of peace.

Vice-President Bawumia also prayed that God to grants the country dominion over acts of omission and commission which he said stood as threats to the unity and peace Ghanaians were enjoying as a nation.

Elections
Touching on the just ended elections, he said “the Ghanaian spirit of peace was again tested when we went to the polls for the Presidential and Parliamentary elections and thankfully by the favour and mercies of the lord almighty we have accomplished this task peacefully.”

Elections, according to Dr Bawumia, usually came with winners and those who had not won but the battle would always be the Lord’s.

He asked that if the battle was the Lord’s, who was the victory for?

“The victory can only be for the Lord, it is not for us because the battle is His. So, at the end of the day, we have finished the elections, we have given the victory to the Lord and it is a victory for Ghana and we should be proud of that,” he told the congregation.

He was grateful to the church for the warm reception and promised to pay another visit.

Sermon
In a sermon, the Founder of the VBCI, Bishop Nii Apiakai Tackie-Yarboi urged Ghanaians to sustain the peace and ensure goodwill at all times.

He also called for goodwill among the political class of the country particularly in this season of Christmas.

He, however, expressed concern Christians were paying so much attention on going to heaven and said they must make the earth a better place before going to heaven.