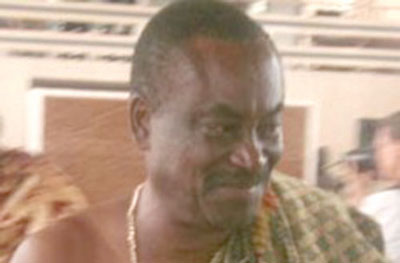 The Paramount Chief of Gbi, Togbega Gabusu VII, has appealed to the major players in the country’s democratic dispensation to sensitise their constituents to accept the outcome of the election petition at the Supreme Court.

He said the petition filed by the main opposition New Patriotic Party (NPP) against the ruling National Democratic Congress NDC) was very sensitive, hence the need for traditional and religious authorities, political parties, National Commission for Civic Education and other stakeholders to educate the citizenry to accept “whichever way the wheel of justice turns”.

Togbega Gabusu, who made the appeal in an interview with Ghana News Agency at Hohoe in the Volta Region, said the court verdict would be a litmus test for the judiciary, as well as the country’s fledgling democracy and “all must rise to the occasion”.

“Let us not play ostriches in this matter and be consumed by inactivity,” he said.

Togbega Gabusu urged public-spirited organisations to join the crusade to sensitise the masses to the issue “saying a stitch in time saves nine”.


He noted that the stakes were high, considering the fact that the petitioners and respondents all polled more than five million votes in the last December 7 general election.

He said, “In the scheme of things, whichever way the justice pendulum swings, it is a win-win game for the constituency Ghana.”

Togbega Gabusu said he expected the leadership of the NDC and the NPP to demonstrate their continued magnanimity and maturity by reaching out to each other when judgement was pronounced to defuse the anxiety and tension likely to be associated with the outcome.

He commended President Uhuru Kenyatta of Kenya and his political rival Raila Odinga for sticking to the verdict of their country’s Supreme Court over an electoral dispute.

Togbega Gabusu said the public statements by the two political figures were commendable and asked the NDC and NPP to replicate their action.

The paramount chief called for review of laws on electoral disputes resolution and asked for imposition of prompt timelines for the delivery of judgment within the shortest possible time.

He expressed the hope that the judges would discharge justice without fear or favour.

Nana Addo Dankwa Akufo-Addo, flag bearer of NPP, his running mate Dr Mahamudu Bawumia and party Chairman Jake Obetsebi Lamptey, have petitioned against the outcome of the process at the Supreme Court, alleging massive fraud in the December elections.