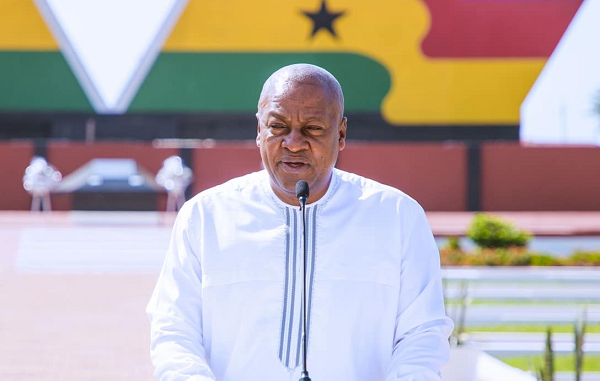 “He was a team leader and it was under his guidance that the National Democratic Congress (NDC) administration chalked up most of its notable achievements, including the longest period of single digit inflation in the history of Ghana for two years continuously; the highest economic growth record of 14.4 per cent that placed Ghana at the top of the World Bank ease of doing business survey for West Africa, thus making Ghana the number one preferred destination in West Africa for investors,” he stated.

Former President Mahama said this when the leadership of the NDC commemorated the ninth anniversary of the demise of former President Mills with a wreath-laying ceremony at the Asomdwee Park last Saturday.

He said nine years after his departure, Ghanaians were reminded of the values and principles he (Mills) extolled and lived-by: a Leadership of Service, Compassion, Integrity, Humility, Sacrifice, and Unity.

“Yet, being the humble achiever that he was, Prof., in tandem with the tradition of the NDC, derived no satisfaction or desire to reel off his unmatched economic statistics in self-praise when his work was there to speak for him,” he said.

Former President Mahama said former President Mills demonstrated that one could rise to the highest positions in life — Professor, scholar, expert in his field, and President — and still be a humble learner.

He said Prof Mills was transparent and saw as important the need to account to the people of Ghana.

“He respected Ghanaians. Professor Mills was passionately concerned about wastefulness, profligacy and arrogant dissipation of public funds and resources. He didn’t just espouse his principles; he lived by them,” he said.

“He saw politics as a contest of ideas and was constantly concerned about the need for leaders to be proper role models for the younger generation who were keenly watching and may end up emulating the actions of the political class,” former President Mahama said and added that politics must be a platform and an opportunity to ensure total development and a general improvement in the lives of the Ghanaian.

He urged members and sympathisers of the NDC to continue to be guided by the values of truth, humility, transparency and accountability that were exemplified in Professor Mills.

“It is especially critical for the survival of our nation that the NDC, as a social democratic party, restores these values and principles that have been lost in our country in order to be distinct from the New Patriotic Party (NPP) and for our people to begin to hope again and trust in our institutions once again,” he stated.

For his part, the National Chairman of the NDC, Mr Samuel Ofosu Ampofo, urged Ghanaians to rise above partisan politics.