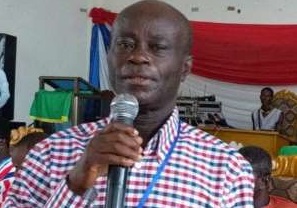 Amidst tension, scuffles and high security, incumbent Central Regional of the New Patriotic Party (NPP), Robert Kutin Jnr, has been retained for the third consecutive time at the Regional Delegates Conference held at Dunkwa-on-Offin last Saturday.

He polled 237 of 425 votes to win the fiercely fought contest.

Before the elections, Mr Kutin Jnr apologised for any mistakes that had negatively impacted on the party in the region and urged them to forge ahead in unity into the 2024 general elections.

Many of the delegates from the coastal communities, including the Effutu, Awutu Senya and Awutu Senya East, Gomoa East, Ekumfi, Mfantseman, Cape Coast North and Komenda Edina Eguafo Abrem had made their stance obvious; a change from the Kutin Jnr regime.

Mr Kutin's campaign team, including the Mayor of Cape Coast and the former Member of Parliament for Gomoa East, Mr Kojo Asemanyi, had worked hard for the Kutin camp managing to win some delegates for the Kutin camp.

While the Dr Essibu campaign had called for a united and all-inclusive party, the Kutin camp called for strong and firm leadership that was essential to break the eight.

Some delegates also indicated that no chairman had been retained twice and called for newer fresh face and ideas for the chairmanship.

But again Kutin's camp insisted the party did not need to take chances with its leadership in the region and kicked against any "trial and error" move to bring in a new inexperienced face.

In the end, the Kutin side and his aligning contestants won most of the positions.

The Chairman of the Regional Elections Committee, Kweku Ofori Asiamah, addressing the press later congratulated the delegates and said it was time to unite the party to help break the eight in the next general elections.

The regional election in the Central Region was put on hold following a court injunction by some party members in the Ekumfi Constituency.

But the Alternative Dispute Resolution and Legal Support Committee of the party resolved the fracas out of court and recommended that elections for the Ekumfi Constituency be held on Friday, June 3, 2022 to allow for delegates from the constituency to elect delegates to vote in the regional election.