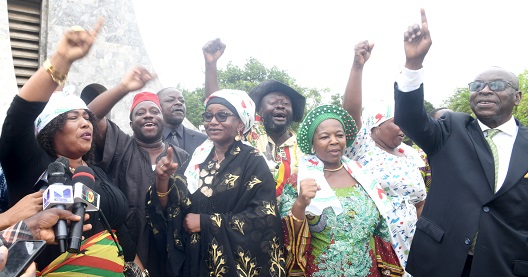 Nana Yaa Akyempim Jantuah (left), the General Secretary of the CPP, and some executive and members of the party singing to commemorate the 50th anniversary of the death of Dr Kwame Nkrumah, Founder of the party and Ghana’s First President. Follow @Graphicgh

The Convention People's Party (CPP) has called on the leadership, rank and file of the party to imbibe the tenets of democracy, rule of law, freedom and justice that have been the ideals and principles of the founding father of the party, Dr Kwame Nkrumah.

The party said the ideals and principles of the founding father to liberate the ordinary Ghanaian from the shackles of poverty, hunger and deprivation were still relevant in the current political dispensation of the country and must not be let down.

At a ceremony held in Accra on April 27, 2022, to commemorate the 50th anniversary of the death of Dr Kwame Nkrumah, who was also Ghana’s First President and Prime Minister, the General Secretary of the CPP, Nana Yaa Akyempim Jantuah, described Dr Nkrumah as a great Pan-Africanist whose ideals still stood tall and relevant in the present times.

A leading member of the party, Bright Akwetey laid a wreath on the tomb of Dr Nkrumah to mark the anniversary.

Paying glowing tribute to Dr Nkrumah, she said he used his experience, knowledge and expertise gained from abroad to improve and further the lot of the people of Ghana and Africans as a whole.

She said his ideals of promoting Pan-Africanism and his vision of developing and liberating the people of the African race from the claws of colonialism and imperialism were par excellence.

"Let us all at the CPP imbibe the tenets of democracy, rule of law, freedom and justice while resisting the rule of the oppressor," she said.

"Today as we celebrate 50 years of Osagyefo Dr Nkrumah’s death, we also remember his dark days in exile in Guinea, the cold and lonely nights on his hospital bed in Bucharest Romania,” she added.

Ms Jantuah also used the occasion to make a request for the return of all the party’s assets from government as a move to deepen comradeship and promote reparation.

Among the assets the party wanted returned were the Ministry of Information building, the Ghana National Fire Service (GNFS) headquarters.

She expressed the hope that the President would oblige to the request.

The CPP general secretary disclosed that plans were in place for the party to give Dr Nkrumah a befitting funeral which would take place in November, this year.