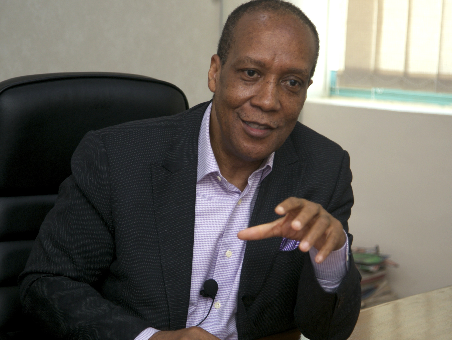 The only independent presidential candidate in the December 7 polls, Mr. Alfred Kwame Asiedu Walker, has said he will work with not more than 25 ministers if he is given the opportunity to manage the affairs of the state.

He said with16 regional capitals, he would need not more than 25 ministers to manage the public purse efficiently and effectively.

He said his prime focus would be on poverty alleviation, job creation and enhanced living standards, for which reason the prudent management of resources and a cut down on government’s expenditure were the ways to go.

Mr. Walker disclosed this during a courtesy call on the Editor of the Daily Graphic, Mr. Kobby Asmah, in Accra yesterday.

He was accompanied by his running mate, Mr. Jacob Osei Yeboah, and members of his campaign team.

Mr. Walker also promised that if he became President, he would not draw salary from state coffers.

“As a self-made person, my focus will be on poverty alleviation and channelling resources into charity work, all in the name of building Mother Ghana,” he said.

The independent candidate said one area where his administration would place premium was the development of a maintenance culture.

In so doing, he was going to reactivate the State Construction Company and the Public Works Department across the country to be in charge of the implementation of the maintenance culture in the country.

He said his government would introduce region-specific development policies to ensure that all regions had their fair share of the national cake.

He said developing the regions based on their needs assessment would help advance their causes, instead of the central government just deciding on anything for them.

Mr. Walker said his government would set up regional development planning committees to plan the development of the country.

The committees, he explained, would comprise experts, adding that paramount chiefs would be part of those committees.

For him, making paramount chiefs members of government’s development committees would go a long way to propel development in the remotest communities.

He explained that since chiefs were the custodians of land, when they were made part of the development committees, they could offer land for free for projects such as schools, markets and hospitals.

Mr. Walker congratulated the Graphic Communications Group Limited (GCGL) on its 70th anniversary, adding that its newspapers had proved their worth in nation-building.

He called on the government to fully resource the company to enable it to deliver on its constitutional mandate.

Explaining how he was going to develop the country, he said his emphasis would be on providing the basic needs of the people, such as potable water and good roads.

He said providing the basic life essential services would help build the needed foundation on which other interventions, such as digitising the country's economy, could be built.

Nonetheless, he said, he would not immediately place emphasis on digitisation, since that was not what majority of the populace needed.

According to Mr. Walker, many of the people did not even have the gadgets to access digital services, and that such people would be happier if the government provided them with just their basic needs.

On the media, the candidate called for more government support, particularly state-owned media houses, to enable them to discharge their constitutional mandate.

He said the media played an important role in the development of the country and, therefore, needed the full support of the government in terms of resources to be able to function effectively and efficiently.

For his part, the Editor of the Daily Graphic, Mr. Kobby Asmah, said the GCGL, as a state-owned media house, had the constitutional mandate to give fair coverage to all political actors, saying the company had lived up to that principle since the Fourth Republic came into being.

He, therefore, encouraged all political actors to make known their comprehensive plan of action towards Election 2020 to enable the various brands of the GCGL to cover their activities.

He said the various newspapers in the GCGL stable had, over the years, served the interest of the country and pledged that the brands would continue to embark on the “nation first” agenda to contribute to the rapid development of the country and the goodwill of the citizenry.

He advised political parties to make known their intentions for the nation, since it was only when the electorate were well informed that they could make informed choices and decisions that would inure to the benefit of the nation.

Mr. Asmah received Mr. Walker and his team in the company of the acting Political Editor of the Daily Graphic, Mr. Albert K. Salia, and the Editor of Graphic Online, Mr. Isaac Yeboah.