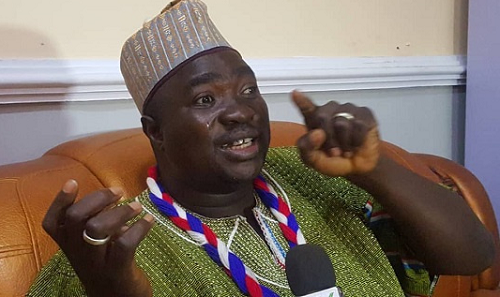 The North East Regional Chairman of the New Patriotic Party (NPP), Nurudeen Fuseini has clarified his recent comments about members of the opposition National Democratic Congress applying for the ongoing nationwide recruitment exercise into the various security services.

Chairman Nurudeen in a statement signed by his aide Simon Suayam and copied to Graphic Online suggested that his comments were made in Mampruli (a local language) on Nobyah FM in Nalerigu on Friday 27th August were lost in translation.

According to him, his comments which warned NDC members who constantly attack the government not to participate in any of the recruitment processes was motivated by their (NDC members) constant pleas for help to get enlisted.

He also denied ever stating in the said interview that NPP members who don’t qualify should apply for the recruitment.

"Chairman Nuru never misses an opportunity to motivate and inspire people, especially members of the NPP. As a result, he did indeed indicate that NPP members should take advantage of the recently advertised recruitments in the security services," the statement said.

"He added that if in the end at least 10 people go through successfully, others who applied and weren’t successful should be patient and wait for other opportunities in future. Chairman Nuru did really say that NDC members who attack government as a habit should not apply to the security services for recruitment. That’s a fact we are ever ready to stand by. While admitting it, it must however be clarified that such a statement was not made in a vacuum. Dozens of NDC members who attacked and still attacking give troop to party stake holders every blessed day asking for help to get recruited or enlisted into the security services. While support in getting recruited in to the security forces might come in many forms as we all know. Chairman Nuru therefore saw an opportunity to send a message to these NDC goons in an unequivocal manner to stay away from applying to the security services with the believe that the party in the region might be of help to them. Chairman encouraged NPP members who are qualified to apply because their welfare is his responsibility, and that cannot be said of the NDC members".

No control in recruitment

He also stated that he had no "power to remove anyone’s application but he said what he said with no regrets".

"Finally, we will like to state that Chairman Nurudeen was speaking to a mainly NPP audience and he said things that will inspire them and keep up their activism for the party. Who in Ghana doesn’t know that the security services recruitments are done online? Chairman Nuru doesn’t control these portals and has no such power to remove anyone’s application but he said what he said with no regrets. There’s nothing in the information required from applicants that will determine if they’re party A, B or C. We will actually be glad if NDC supporters will heed the advice of Chairman Nurudeen and stay away from applying to the security services and other job vacancies for recruitment since that will increase the chances of NPP members and nonaligned citizens.

"In conclusion, Chairman Nurudeen will like to urge all NPP members to close their ranks as it has become very apparent that there are traitors among us collaborating with the enemies of the party and government. The interests of the party and its members will always remain the preoccupation of Chairman Nurudeen and he’s willing to go to the gallows for that. It must be clear to us now that those who mean well for the party have been separated from the evil collaborators who don’t care about the future of the party but only their selfish ambitions".