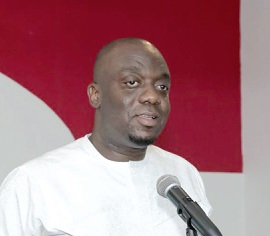 The remedial interventions put in place by the government are gradually yielding results, the General Secretary of the governing New Patriotic Party (NPP), Justin Frimpong Kodua, has said.

That, he said, was evident as the Ghana cedi had witnessed significant gains in value, over the past two weeks, by appreciating about 63.7 per cent against the United States dollar as of December 15, 2022.

He disclosed that it was as a result of the leadership of the NPP having several engagements with government with the aim of addressing the legitimate concerns expressed by the populace.

Mr Kodua said this at a press conference held in Accra yesterday by the party on recent developments in the country.

Mr Kodua noted that owing to the appreciation in the value of the cedi, prices of petroleum products at the pump had reduced, resulting in a 15.3 per cent reduction in transport fares as announced by transport unions.

“Although these developments may not entirely address prevailing socioeconomic conditions in the country, we do believe strongly that they may offer relief to Ghanaians, especially as we approach the festive season. Certainly, there could not have been a better Christmas gift,” he said

He, therefore, appealed to all manufacturers, and traders, on account of the cedi appreciation, reduction in fuel prices and transport fares, to also reduce prices of commodities to conform with the new reality.

In response to the opposition National Democratic Congress (NDC), who constantly criticised the government throughout the difficulties, the NPP chief scribe said people had not forgotten the record of former President John Dramani Mahama and the NDC.

“The Ghanaian people are very much aware of the fact that during their tenure, even without any global economic crisis, the John Mahama-led NDC government was so overwhelmed by their own incompetence that they could not even keep the lights on, plunging this country into darkness for four years while destroying many livelihoods,” he explained.

Mr Kodua added that the NDC could also not implement any social intervention programme to mitigate the suffering of the masses and further worsened it by cancelling existing ones, including teacher trainee and nursing trainee allowances, among others.

“We, in the NPP, do not shy away from our records, and are ready to debate our political opponents on any day. The Ghanaian people are the best judges,” he added.

However, he said, despite the lingering impacts of the global pandemic and the Russia-Ukraine war, resulting in a global socioeconomic crisis, the NPP government was still able to sustain its interventions such as the Free SHS, the one-district, one factory (1D1F) initiative, among others.

Mr Kodua added that they had been able to consistently pay salaries on time, and had undertaken unprecedented building of roads and railway infrastructure while keeping “the lights on”.

“So the difference between us and the NDC is clear, the evidence shows clearly that even in the worst of times, we are better managers of the economy,” he added.