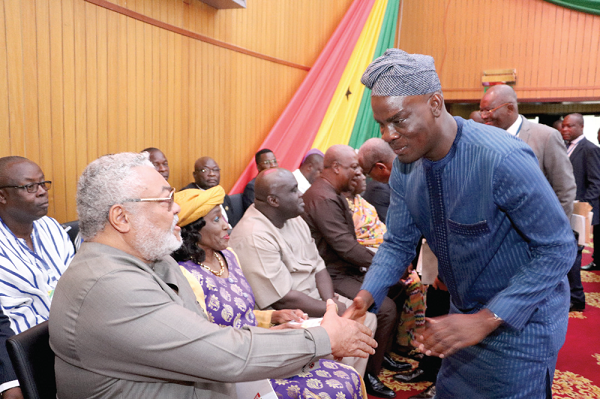 FLASHBACK: Mr Iddrisu in a handshake with former President Rawlings during an event in Accra
30.5k Shares

The Minority Leader, Mr Haruna Iddrisu, has stated that the death of former President Jerry John Rawlings has created a void in the country.

He said the void created by Mr Rawlings’ death could not be filled and that Ghana had lost a dedicated public servant par excellence.

"He has contributed immensely and enormously to the transformation of Ghana, economically and politically," Mr Iddrisu, who is also the Member of Parliament for Tamale South, said in an interview with the Daily Graphic last Thursday.

He described Mr Rawlings as a unique personality who had contributed immensely to the transformation of Ghana.

He said the country owed its current multiparty democratic dispensation, peace and stability as well as economic reforms to the late former president.

Mr Iddrisu said there was no president in the history of the country who had fought corruption better than former President Rawlings.

He said the death of the former president should be a wake-up call to all leaders to seek public offices for public good and not to enrich themselves to the disadvantage of the larger Ghanaian society.

He said former President Rawlings’ motivation for public service was for the public good as he selflessly and relentlessly fought cronyism, nepotism and graft, stressing that “his death must inspire all to seek the national interest.”

He expressed his deepest condolences to the former First Lady, Nana Konadu Agyemang Rawlings, the children and to Ghanaians.

Mr Iddrisu said it was difficult for many Ghanaians especially the Minority Caucus in Parliament to come to terms with the death of Mr Rawlings.

Mr Rawlings, 73, died last Thursday after a short illness at the Korle-Bu Teaching Hospital, where he was receiving medical attention.

He was the founder of the National Democratic Congress (NDC) and served as Head of State for 19 years.

Prior to serving as the first President of the Fourth Republic from January 7, 1993 to January 6, 2001, the late Mr Rawlings also served for 11 years as a military leader of the Provisional National Defence Council (PNDC) from December 31,1981 to January 6, 1993.

He had previously served as the Head of State under the Armed Forces Revolutionary Council (AFRC) from June 4, 1979 to September 24, 1979, when he led a group of soldiers to overthrow the Supreme Military Council II in a coup d’etat. #GhanaVotes2020