Profile: Who is John Boadu? 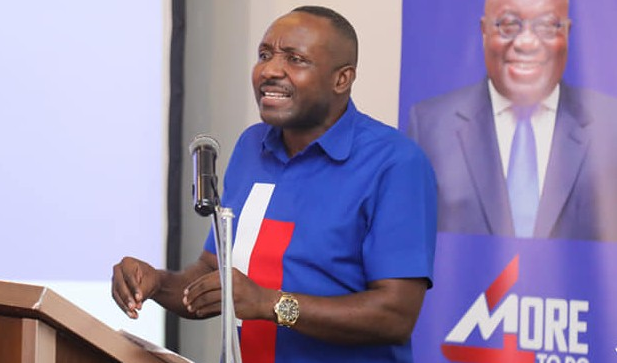 The general secretary position of the New Patriotic Party (NPP) is one of the positions being hotly contested by six aspirants as the party goes to the polls in mid-July to elect its national officers to steer the affairs of the party.

John Boadu, the current General Secretary of the party, is seeking re-election and is leaving no stone unturned to win the hearts and minds of the delegates.

Having served as an interim general secretary in 2015 following the suspension of the then incumbent, Kwabena Agyei Agyepong, Mr Boadu was elected in 2018 to continue with his work.

But knowing that winning elections does not come easy, Mr Boadu has been criss-crossing the country to woo delegates to elect him for a second term in office.

Campaigning under the slogan “Making history together, the time-tested General”, he believes that “breaking the eight is not about testing the waters, it is about choosing the tested”.

Mr Boadu, who is an accountant and data analyst, told the Daily Graphic in an interview that despite the challenges facing the economy, the NPP was better placed to provide the needs of the people and boost private sector businesses.

He, therefore, urged Ghanaians to trust in the NPP and be reassured that things would come back to normalcy even before the 2024 election.

Mr Boadu said he was bringing experience to the fore to propel the party to break the eight.

When asked about any assurance for the delegates to vote for him, he said he was a man they could trust and a man who kept his promises.

He explained that the decisions and the choices the delegates would make would have a direct impact on the party’s electoral fortunes during the 2024 general election and whether the party could fulfil its appointment with destiny to break the ‘eight’, hence his decision to contest for re-election for “this destiny-defining decision-making process”.

“Certainly, this is not the time to bring an entirely new and relatively inexperienced team to lead the party in what promises to be the most difficult general election to be contested by the party as we seek to break the eight, which no political party has been able to do in this Fourth Republic,” he stated.

Mr Boadu said in the party’s quest to break the ‘eight’, it needed to put its best foot forward with experienced officers, stressing that “this is the time the rich experience that I have acquired in working for the party will be needed the most”.

As to whether he thought the performance of the NPP in the past two terms would warrant the party winning the 2024 election, Mr Boadu said the party had largely delivered on its promises in successfully rolling out more social intervention programmes to ameliorate the suffering of the masses, particularly the poor.

“We also performed very well in the economic front until the COVID-19 pandemic and the Russia-Ukraine war disrupted the progress made,” he explained.

“I am honest enough to take responsibility for this. However, it will be a great disservice to sound political analysis to perceive those losses as a reflection of the incompetence of the general secretary, as some have said, especially those seeking to contest this position,” he stated.

Mr Boadu said the government’s decision to go to the International Monetary Fund (IMF) was in line with the current world economic crisis that had been confirmed by the IMF itself.

“The IMF has said over 100 countries have approached it for support and this should be stated clearly and loudly,” he said.

Mr Boadu said even the World Bank had also slashed its global growth forecast to 2.9 per cent for 2022.

“The key advantage for us in Ghana is that the IMF programme will restructure our debt so that it does not become a burden in our plans going forward. It will also give us space to strengthen our revenue system. The world is suffering and so is Ghana. We feel the pain because we are all in it,” he stated.

When asked of the implications for the party in the 2024 election, Mr Boadu said the impact would be negligible as the NPP was committed to engaging the Ghanaian people and letting them appreciate the vast difference between the NDC-IMF programme entered into in 2015.

That programme, he said, “was driven by economic mismanagement and lack of policy credibility and the recently announced IMF engagement by the government”.

He said the NPP would continue to explain to Ghanaians the current predicaments, which was the case in almost every country in the world.

“On account of this, the Ghanaian people, I’m sure, will understand the extraordinary times we are in, which has necessitated our decision to seek IMF support.

“I am also confident and optimistic things will get much better before Election 2024, and the Ghanaian people will renew our mandate in the election,” he said.

Touting some of his achievements, Mr Boadu said the election management style of the NPP was changed during his tenure as General Secretary in 2016 when the party successfully rolled out a robust IT architecture – an election management software known as pink sheet tracking system - which had never been seen before in Ghana’s politics.

“We did not rely on the Electoral Commission. We did not rely on the media. We relied on a homegrown party strategy, the pink sheet tracking system, which made it possible for the party to collate its nationwide election results from all the 38,000 polling stations in a record time of less than 12 hours after the polls.”

“In 2020, we collated our results and knew the outcome within six hours after the close of polls. And God willing in 2024, we will work to get our results in less than four hours. We have broken every record in election management in Ghana,” he stated.