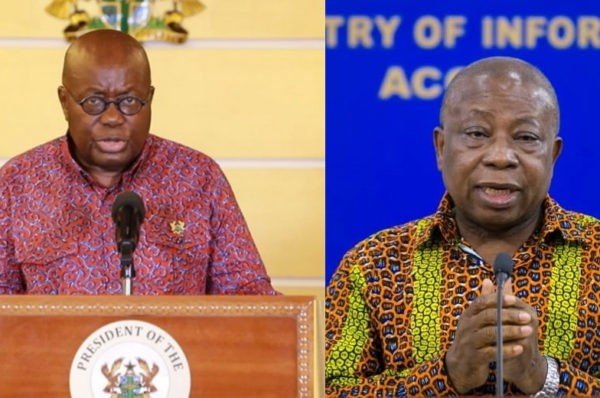 There are calls for President Akufo-Addo to crack the whip on Mr Agyeman-Manu who confessed not to have followed due process in his purchase of Sputnik V for the country.

President Akufo-Addo joked about Mr Agyeman-Manu being slapped left and right by Ghanaians, as he addressed the chiefs and people of Dormaa.

Speaking in the Bono Region last Tuesday during his two-day tour of the region, President Akufo-Addo said: “There are a lot of people from the Bono Region in my government; including the minister of health, who is currently receiving slaps [from Ghanaians]. He is an indigene of Dormaa. He has really suffered in that Health Ministry and is still suffering,” he said amid laughter.

As the clamour for his exit reaches a climax with threats of demonstrations over the issue, Mr Kwaku Agyeman-Manu has been granted a two-week leave for personal reasons.
Reports, last Monday, indicated the leave was approved by the Chief of Staff, Mrs Frema Osei-Opare, last week.

“The contract he signed means that payment was to be made soon after the 20,000 vaccines were delivered so on what basis could the Minister go to Parliament to say that nothing had been paid? Is Al Maktoum Father Christmas that he would give you vaccines and not receive payment?

“That is why I believe we have to press the issue of perjury very hard because Agyeman-Manu is not leaving and they have to make the law bite. I want citizens to join me so that we will present a joint petition to Parliament so that he will be tried for perjury,” he said on Joy FM’s Newsfile.

On August 5, 2021, in an interview with Asaase Radio, Finance Minister, Mr Ken Ofori-Atta, defended Mr Agyeman-Manu and pleaded with Ghanaians to be empathetic with his colleague whose actions, he said, were out of good faith.

“I kind of have listened to the argument and with hindsight … I think there is so little empathy in appreciating what my colleague minister must have been going through.

“To be so unsympathetic to someone who felt like what can I do to ensure that there is continuity and to sit now comfortably …. I am empathising with him and I expect that others will realise the type of pressure that he was under and his commitment to ensure that the Ghanaian people are safe.”

For his part, Deputy Majority Leader, Mr Alexander Afenyo-Markin, who was the chairman of the Ad Hoc Committee that probed the scandal, spoke more to the issues and admitted the minister erred but not to the extend that he needed to be punished.

Afenyo-Markin in an August 10, 2021 interview on Accra-based Citi FM, said all his readings pointed to the fact that: “there is no such law that I have read that implicates the minister,” adding that the embattled minister was at best a victim of circumstance and political mischief.

“Unfortunately, Mr Agyeman-Manu has become a victim of circumstance and that is the price you pay when you come into public service.
It is expected. People can misconstrue you. The public has not received the full facts. People are twisting the story to embarrass him.

“The point is that when he was referring to that figure, at the point in time, he was responding to questions on the Government of Ghana sources, bear in mind that for bilateral sources there is no third-party distributor. So he said that on that score, he would not pay more than that.

“In our findings, we said it would have been prudent for him to seek the Attorney-General’s advice, come to Parliament, and go to PPA before signing the agreement. We don’t want the impression to be that the NPP side of the committee is defending the minister.