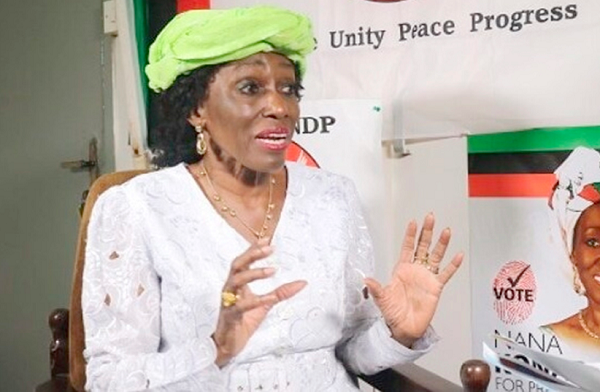 Nana Konadu Agyeman-Rawlings, founder and leader of the NDP addressing the durbar of Regional Chairpersons of the party Follow @Graphicgh

The Founder and Leader of the National Democratic Party (NDP), Nana Konadu Agyeman-Rawlings, has commended the Electoral Commission (EC) for the efficient conduct of the 2020 general election.

She said the efficient mechanism put in place by the current EC, headed by Jean Mensa, proved a mark of efficiency.

She was speaking at a meeting with the Regional Executives of the party in Accra yesterday at the party's head office at Kokomlemle in the Greater Accra Region.

Mrs Agyeman-Rawlings said the EC should not be intimidated nor stampeded out of its constitutional mandate and called on all stakeholders to support the EC.

She noted that the Inter-Party Advisory Committee (IPAC) should continue to evolve as a persuasive and indicative forum to support the EC in the discharge of its duties.

Mrs Agyeman-Rawlings, who took a back- seat on the political front in 2020 following the death of her mother-in-law, Madam Victoria Agbotui, and later her husband, former President Jerry
John Rawlings, dismissed what she termed rumours purporting that she was reconciling with another political party different from the NDP.

She said with hardwork, the NDP would overcome all its challenges and looked forward to the 2024 elections as a turning point with the party’s dominance in governance.

She said after 30 years of the 1992 Constitution, it was time for Ghanaians to relook at the document and make the requisite amendments to make the country better.

Mrs Agyeman-Rawlings indicated that the issue of separation of powers should be clearly defined to ensure that roles of the three arms of government were independently defined to enhance participatory democracy.

She challenged the regional executives of NDP to champion Technical and Vocational Education and Training (TVET) courses in their regions to help young people acquire relevant skills favourable to the local and international labour markets.

She stressed that technical training played a vital role in strengthening the country’s economy.

On national security, Mrs Agyeman-Rawlings called on all Ghanaians to cooperate with the security agencies by providing timely information that could led to the arrest of miscreants in society.