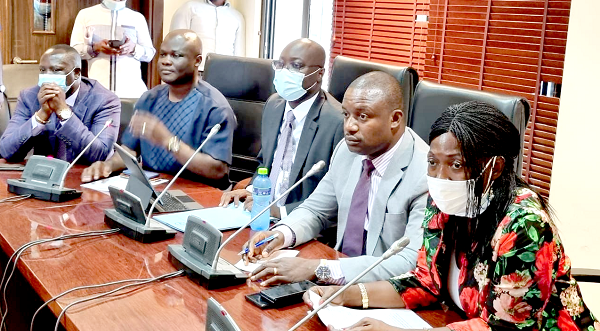 The Ranking member of the Mines and Energy Committee of Parliament, Mr John Abdulai Jinapor, has called on the government to suspend the Special Petroleum Tax on petroleum products in the 2022 budget.

That, he explained, would provide some respite for Ghanaians from the high cost of fuel at the pump.

“We make this demand because crude prices which were pegged at a benchmark price of $54.75 dollar per barrel in the 2021 budget statement has risen to over $85 representing an increment of over 55 per cent,” he stated on behalf of the Minority in Parliament.

Addressing a press conference in Parliament House yesterday, Mr Jinapor said as a net exporter of crude oil, Ghana’s revenue receipts from petroleum exports were expected to increase from the initially projected figure of $800 million to more than $1.2 billion.

“What this means is that the nation is making huge unanticipated revenues from crude exports hence the need to abolish the Special Petroleum Tax to ameliorate the suffering of the ordinary Ghanaian,” he stated.

Touching on the sanitation levy, Mr Jinapor said despite the introduction of a sanitation levy of 10 pesewas per litre of fuel, the country continued to be engulfed in filth with poor management of garbage across the various towns and cities of the country.

He, therefore, called for a review of the levy by resorting to the polluter pay mechanism which was a more pragmatic way of managing waste.

He said it was untenable to tax ordinary fuel consumers since the consumption of same did not contribute to the waste being generated daily.

Mr Jinapor called for the reconstitution of the Board of the Tema Oil Refinery and appointing a substantive managing director with the task of ensuring that the refinery processed domestic crude to its fullest capacity.

“The current state of TOR leaves much to be desired. It will be recalled that as part of efforts to revamp TOR and ensure value addition to our domestic crude, the NDC at the time procured about two million barrels of crude for processing by TOR,” he stated.

He said the NDC rejected the decision by President Nana Addo Dankwa Akufo-Addo to turn the refinery into a tank farm, stressing that “with the right polices, the refinery can be turned around to fulfil the purpose for which it was built.”

“We equally demand proper accountability on the collections, utilisation and balances of revenues accruing from the Price Stabilisation and Recovery Levy primarily meant to cushion consumers in times of high crude prices,” he stated.

He also called on the government to re-prioritise and focus on critical capital expenditure to anchor the economy for long-term gains.

Mr Jinapor said the Minority would not countenance any further tax increases or new tax handles.

“This is not what the NPP promised Ghanaians prior to the 2020 election. We were told the economy was on track. We were told that all was well and Ghana was ready for a take-off. What has changed? We therefore demand the abolition of these taxes,” he stated.