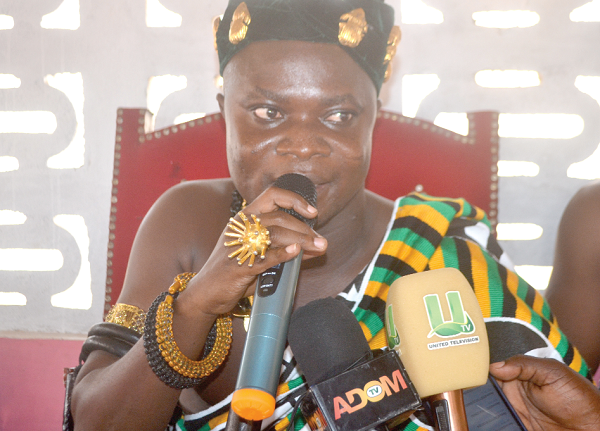 The Chief of Gomoa Otapro in the Central Region, Nana Osompah Nyamekye II, has urged Parliament to fast-track the passage of the bill that criminalises Lesbian, Gay, Bisexual, Transgender and Queer (LGBTQI+) activities currently before it.

According to him, with the growing activities of LGBTQI+ across the world, it was important that Parliament passed the bill to prevent such activities from gaining root in the society.

“Ghana is not ready to accept LGBTQI+ activities and the only way to protect the sanctity of the Ghanaian is the passage of the law that will severely punish persons who engage in such acts,” he said.

Nana Nyamekye said this while addressing a press conference to add his voice to the ongoing public discourse against gay, lesbianism and its related activities in the country.

A private member’s bill, “The promotion of Proper Human Sexual Rights and Ghanaian Values Bill, 2021’ which criminalises Lesbian, Gay, Bisexual, Transgender and Queer (LGBTQI+) activities in the country, was introduced in Parliament on August 3, 2021, and is currently being handled by the Committee on Constitutional, Legal and Parliamentary Affairs.

Nana Nyamekye noted that the LGBTQI+ and its related activities were affront to the growth of society, stressing that “it is the family which helps the society to grow and the promotion of gay and lesbianism is a threat to the survival of the society”.

He disagreed with the notion that LGBTGI+ was a human right issue noting that “LGBTQI+ has nothing to do with human rights and that activists should not hide under the cloak of human rights to seek recognition”.

The Queen mother of the town, Nana Essumanba II, advised parents with wards in senior high school (SHSs) to monitor such children since some of them were exposed to particularly gay and lesbianism while in SHS.

“It is becoming increasingly worrying that children in boarding schools are often lured into such acts and, therefore, admonished parents to be vigilant to protect their children from engaging in such an unacceptable act.