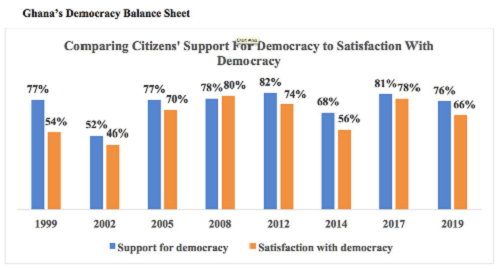 I have often argued that Ghanaians have made their “peace” with democracy as their preferred system of government.

This, I back up with the patterns I see in their responses to three particular questions in the Afrobarometer survey. The percentage of citizens who (a) say that democracy is preferable to any other form of government; (b) say that leaders must be chosen through regular elections and (c) say that they disapprove of military, one party and one-man rule is the basis of my contention.

Over the course of eight rounds of the Afrobarometer survey, Ghana’s democracy balance sheet has recorded deficits seven out of eight times, where satisfaction with the way democracy is working has lagged support for democracy. The deficit was at its highest in Round 1, 1999 (-23 per cent) and at its lowest in Round 7, 2017 (-three per cent).

What drives our democracy deficits?

To explore possible drivers of our democracy deficits, I explored three broad areas to see whether the patterns observed mirrored the patterns observed in our democracy balance sheet. The areas are (a) trust in institutions that make democracy work. (I examined 10 institutions and the average percentage of Ghanaians who said they trust these institutions a lot); (b) perceptions of the fight against corruption (the percentage of Ghanaians who perceive the fight against corruption as being handled fairly well/very well by government) and (c) government performance (I examined nine public problem domains and the average percentage of Ghanaians who rated government performance as fairly well or very well.)

Democracy deficits should be a cause for concern for governments as it depicts discontent on the part of citizens in terms of the way democracy is working. However, it is important to note that the promise of democracy will always be a work in progress. To improve our democracy balance sheet i.e., achieving very low deficits or surpluses, it is very clear that governments must adequately address key public problems, institutions must work hard to earn high levels of trust from citizens and as a people, not fail in our commitment to fight corruption.

The writer is a Democracy and Governance Fellow at the CDD-Ghana.