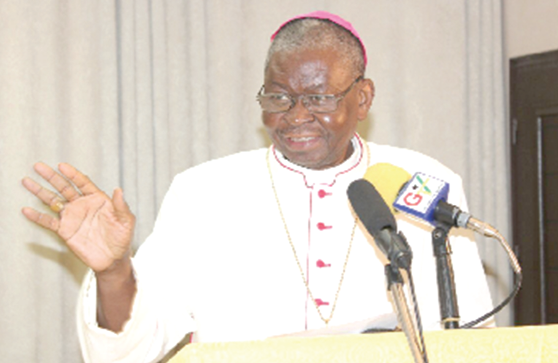 The Ghana Catholic Bishops’ Conference (GCBC) has appealed to the government to revisit the recommendations by the Professor Fiadjoe Constitutional Review Committee for a National Development Plan.

“We are of the strong conviction that the implementation of these and other recommendations will be in the right direction,” it stated.

In a communique issued at the end of the plenary of the GCBC in Wa last Friday, the bishops noted that during the consultations of the Prof. Fiadjoe Commission, “there was widespread, consistent and a clear call for the formulation of a national development plan or vision for Ghana.

There was universal agreement on the need for a long-term, strategic and relatively binding National Development Plan.”

It said the bishops were of the strong conviction that the implementation of these and other recommendations will be in the right direction.

It, however, observed that the nominations and confirmations of Metropolitan, Municipal and District Chief Executives (MMDCEs) over the years had brought to the fore how deep rooted the culture of bribery and corruption in the country’s governance system was.

“This calls for the need to return to the proposal for a constitutional amendment to elect the MMDCEs,” it stated.

While acknowledging the positive achievements chalked up by successive governments in the provision of infrastructure development, improved access to quality health, education and essential utilities, “we your bishops and many other Ghanaians have observed that our numerous challenges persist”.

“These challenges, among others, include: youth unemployment, bribery, corruption, greed, selfishness, lack of patriotism, poverty, deplorable roads, carnage on our roads, armed robbery, murder and other crimes, “galamsey”, weak and ineffective institutions of governance, abandoned and unfinished government projects, the culture of impunity, examination malpractices, violence, intimidation, attack on media men and women, human trafficking and abductions,” it stated.

The communique pointed out that “this worrying state of our nation calls for some fundamental changes in our governance system with regard to strategic and well-structured development plans by all governments.”

The bishops reaffirmed their support for the Proper Human Sexual Rights and Ghanaian Family Values Bill, 2021 and appealed to Ghanaians to support it so that it was passed into law.

“The position of the Catholic Church on Lesbian, Gay, Bisexual, Transgender, Queer, Intersex, Asexual Plus (LGBTQIA+) has remained the same, that such practices are against not only Christian values, but Muslim and Ghanaian traditional values as well,” it stated.