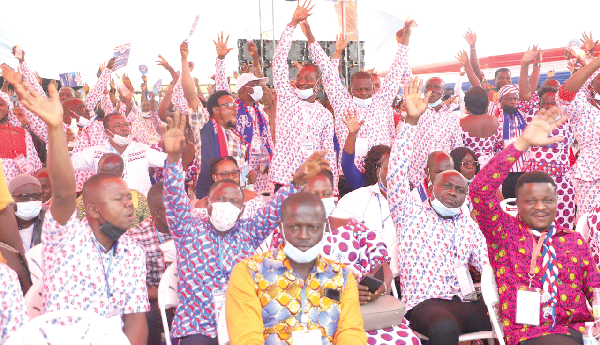 There was great excitement, funfair and felicitation at the Heroes Park of the Baba Yara Stadium as delegates of the New Patriotic Party (NPP) gathered to hold the party’s major delegates conference after the 2020 general election.

It all started with the arrival of the delegates as early as 5:30 a.m. all dressed in NPP colours of red, blue and white.

Traders were also not left behind as they paraded a lot of NPP paraphernalia and various food joints to provide the emergency needs of delegates and patrons.

For those selling the party paraphernalia, some of them had to pitch camp two days before the conference so that they could maximise sales.

The party’s COVID-19 protocols were in full gear as the officials enforced the no COVID-19 vaccination certificate, no entry policy.

Those without the vaccination certificates were refused entry into the arena of the conference.

There were reports of the arrest of some persons who wanted to force their way into the conference grounds.

But it did not stop "the hungry" supporters from having a feel of the event with their mini carnival on the streets of Amakom with their drum-beating and foot-stamping "jama."

Mostly clad in all white apparels with a few in a newly-designed cloth for the occasion, the supporters went agog with occasional screams and yelling perhaps just to get attention.

The grounds remained calm until the Vice-President, Dr Mahamudu Bawumia, was invited to address the conference, when it went to a frenzy as delegates rushed to the frontage of the dais chanting the name of Dr Bawumia.

It took party security officials a tough time controlling the crowd as they refused to heed to calls by the master of ceremonies to return to their seats.

Some political pundits have interpreted it to be calls for Dr Bawumia to lead the party into the 2024 presidential elections as its flag bearer.

During his sermon at the church service, the immediate past Diocesan Bishop of the Methodist Church, Kumasi, Rt Rev. Christopher Nyarko Andam, underscored the fact that unity had the power to break any obstacle and achieve the impossible.

Speaking on the topic "the power of unity" and using the Bible story of Babel, he said irrespective of whatever association or group one belonged to, unity was crucial to propelling such a union into realising the dream it sets itself to do.

From the family level through to the national level, Rt Rev Andam said Ghana's progress hinged on unity and togetherness, stressing that "party stands for unity. If you want to work as a team, you have to work in unity.”

Setting the atmosphere for the "word of God" evergreen gospel musicians, the Tagoe Sisters, and Evangelist Diana Asamoah thrilled the delegates to some heart-warming tunes.