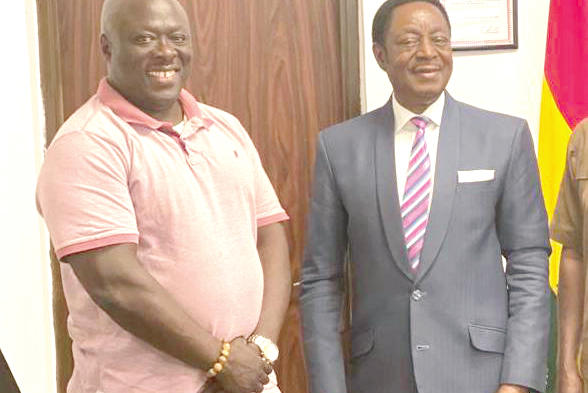 Mr James Agbey (left), Chairman of the Action Movement of the NDC, with Dr Kwabena Duffour, former Governor of Bank of Ghana

Action Movement, a group affiliated to the National Democratic Congress (NDC), has described Dr Kwabena Duffuor as the person with the magic wand to secure a resounding victory for the party in the 2024 general election.

The group said Dr Duffuor was an excellent Governor of the Bank of Ghana and former Finance Minister who executed his duties with distinction.

Aside from that, it said Dr Duffour, a prominent native of Ashanti Region, would be able to secure more votes from the stronghold of the New Patriotic Party (NPP) to win the polls.

The Leader of the Action Movement, Mr James Agbey, stated this in an interview with the Daily Graphic in Accra, adding that the NDC would win a resounding victory in 2024 with Dr Duffuor as its flag bearer.

He explained that Dr Duffuor would be able to mobilise more votes to turn the table around in the Ashanti Region and ensure that the NDC forms the next government under his leadership.

Mr Agbey, who has just been appointed to the position of Director of Operations for the Greater Accra Region Security Committee, described the contest to elect a flag bearer as “a purely internal contest of a democratic congress”.

He urged party members who supported different aspirants to know that the beauty of the NDC was in its internal democracy and that they should know that there was a contest and not a fight.

Addressing party stakeholders as part of his ‘Thank you’ tour in the Western Region last Thursday, October 14, 2021, former President John Mahama urged the leadership of the NDC not to hinder persons who wanted to become the party’s flag bearer for the next general election.

He said the party must rally behind any candidate who would emerge victorious after the primaries.

“From next year, we (NDC) will begin our branch, constituency, regional and national elections. From there we will do our election for a flag bearer.”

Action Movement had earlier called on Dr Duffuor to enter the party’s flag bearer race since the NDC must put its “best foot forward” in the 2024 general election.

“Just like many party faithful are already drumming up support for Dr Duffuor to enter the NDC presidential race, the Action Movement demands the entry of the former Finance Minister and any other NDC activist who is interested in making Ghana a better place,” the group said.