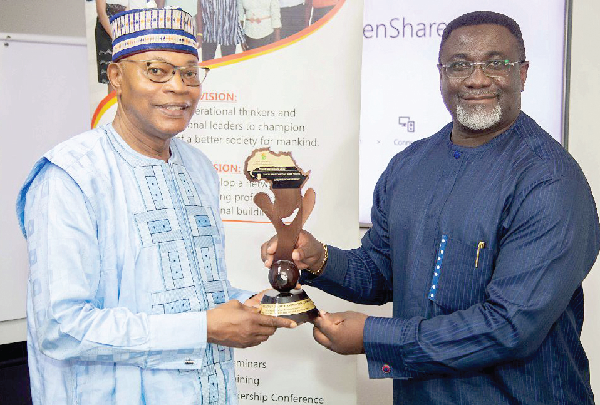 A former Special Representative of the UN Secretary-General and Head of the UN Office for West Africa and the Sahel, Dr Mohammed Ibn Chambas, has challenged the youth to be bold and assertive in contributing to the country’s development.

“The youth are not supposed to follow the path of the old. In many countries, they are departing from the old ways of their fathers — corruption, nepotism, cronyism, vindictiveness, greed and selfishness — and creating a new generational path into the future,” he said.

Dr Chambas also urged the youth to be more responsible and accountable than the generation before them to actualise the dreams their predecessors and fathers could not attain.

He was speaking at the 12th MTN Pulse Transform Africa Conference and Role Model Awards in Accra last Friday.

The event was organised by the Young Professionals and Youth Coalition (YPYC), a youth-oriented non-governmental organisation (NGO), on the theme: “Transforming Africa: The role of African young leader”.

Dr Chambas also called for the inclusion of the youth at all levels of the national development agenda, saying decision-making should not be the preserve of the top echelons of political authority.

According to him, some people erroneously assumed that the directive principles of state policy, as contained in the 1992 Constitution, which is unequivocal on youth inclusion and engagement in the overall national development architecture, meant the youth must necessarily occupy top political positions.

“Conversely, it does not also mean that the youth cannot or should be excluded,” he added.

Dr Chambas said the world was replete with youthful leaders who had shrugged off counter arguments on their competencies to emerge as role models. These are the good examples the African young leader must emulate,” he added.

He said the continent was begging for transformational leadership and responsible citizenship now more than at any time in history.

He said after decades of efforts to lift the continent out of poverty, diseases, conflicts, corruption and despondency, the situation remained same across the region.

On the African Continental Free Trade Area (AfCFTA), Dr Chambas advised the youth to take advantage of the initiative to enhance their capability to create more businesses and jobs for improved livelihood.

He commended the YPYC for the good work it was doing to empower African youth to develop their potential.

The Founder and President of the YPYC, Mr Andy Osei Okrah, said the role of the young African leader would come alive if the governing architecture and social contract were woven around the primary interest of the youth.

He claimed that the enormity of challenges confronting the young African leader created fear and panic among government functionaries.

“But this could be contained if the young African is given the needed leadership training and human capital investment,” he said.

For his part, the Chairman of the YPYC, Dr Emmanuel Adu Sarkodee, urged the youth to provide transformational solutions for issues hampering development.