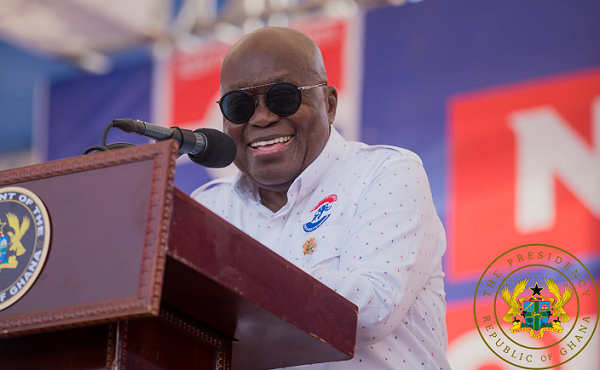 While expressing his desire to hand over power to an NPP government in 2025, the President, however, indicated that internal party actions leading to the next elections would actualise that dream or not.

Addressing the National Delegates Conference of the NPP in Kumasi yesterday, he said: "Every step taken now leading to the 2024 elections is going to be decisive, either to give us victory or not.”

President Akufo-Addo said the NPP, with its democratic credentials, must accommodate competition, but it must be done in a manner that would not hinder its forward march to “break the eight".

“Let there be competition, and competition wil be there, but it must inure to strengthen the party and help it win the elections,” he said.

In his view, the 2024 elections were for the NPP to lose, but emphasised that it would require discipline and a united front, and promised a level-playing field for all presidential aspirants to produce an acceptable leader to be backed by all.

Taking a look at the economy, the President said he was aware of the difficulties people were going through as a result of the economic slowdown caused by the COVID-19 pandemic.

However, he said it was not time “to throw our hands up in despair”, indicating that the government was determined to bring the people out of the situation.

He said the solution lay with the Ghana CARES (Obaatanpa) economic programme which, if followed through, would lead to progress and prosperity for all.

The challenges brought about by the COVID-19 pandemic aside, the President touted the achievements of his administration in the last five years.

He said no government in the Fourth Republic had spent more money to improve on education, health, agriculture and infrastructure, especially in the road sector, than it had happened in the last five years.

He said most of the programmes and projects being executed were thought through while in opposition.

On that basis, he challenged the National Democratic Congress (NDC) to point to one social intervention it rolled out while in government.

Delving into developments in Parliament, President Akufo-Addo sought to clarify what appeared to be a wrong impression about the status of the Majority and the Minority.

He commended the NPP MPs for supporting government business and working for the passage of the Appropriations Bill for the 2022 fiscal year last Friday.

The Vice-President, Dr Mahamudu Bawumia, jabbed the NDC for making mockery of its 2020 presidential election petition, describing it as "fundamental incompetence".

He said after deceiving its followers that it had won the 2020 elections, the NDC went to court to change the narrative that, indeed, no party had won the elections.

In the opinion of the Vice-President, the NPP had become the most important driver of the Ghanaian vision and developmental agenda, as the party, while in government, had been responsible for most of the important policies that touched on the lives of everybody.

He said comparing the NPP and the NDC was like comparing day and night.

Focusing more on the NDC, he said the opposition party had no transformational policy, unlike the NPP which had rolled out at least 25 social interventions to reduce the suffering of Ghanaians.

Dr Bawumia posited that the government had not solved all the problems facing Ghanaians, but per the macroeconomic indicators, the NPP had performed better.

Furthermore, he said the average bank lending rate under the NPP was 21 per cent, while it was 32 per cent under NDC.

In addition, he said the average exchange rate depreciation over the last four years was the lowest since 1992, while trade balance had recorded surpluses consistently for four conservative years.

On jobs, the Vice-President said at least 750,000 unemployed youth had secured jobs over the last five years.

In a message sent to the conference, former President John Agyekum Kufuor called for reconcilation among the rank and file of the party.

"With unity and committed fellowship, the party and the government's attractiveness will be urgently restored and deepened," he said.

Mr Kufuor said the NPP Headquarters must urgently have a professionally strategic team to ensure that its opponents did not outsmart the party in the current battle of knowledge which was pervading in the national political arena.

According to the former President, sustaining that critical knowledge would go a long way to guarantee victory for the party in the 2024 general election.

He said under no circumstances must leadership of both the party and the government become detached from the grass roots.

The Majority Leader in Parliament, Mr Osei Kyei-Mensah-Bonsu, called for a serious introspection of issues that could hold the party down.

According to the Majority Leader, who is also the Minister of Parliamentary Affairs, if the NPP was able to unleash its full potential, it would be difficult for any other political party to win any general election in the country.

He insisted that that could only be realised if party members buried bitterness against one another after party primaries.

Mr Kyei-Mensah-Bonsu said the increasing monetisation that accompanied the party's internal elections called for refection on the appropriate methods in choosing party leaders at all rungs of its structure.

He said the current system only helped to widen and deepen the gaps, rather than helping to build a united party.

He noted that the current system only bred factionalism, which could tear the party apart.

The Suame legislator applauded the people of the Ashanti Region for playing a central role in the party's victory in the last elections.

He described the region as the nerve centre of the party, saying that Kumasi was always crucial in determining who won any general election.

However, Mr Kyei-Mensa-Bonsu said, as a party, it was time for the NPP to confront the reality and not assume that everything was right.

The Ashanti Regional Chairman of the party, Mr Bernard Antwi-Boasiako, aka Wontumi, in a characteristic mood, touted Ghana as a better place to be than the USA and the UK under the COVID-19 regime.

He reiterated the need for unity in the party because, according to him, "development will not fall from heaven".

John Boadu on what NPP needs to 'break the 8'