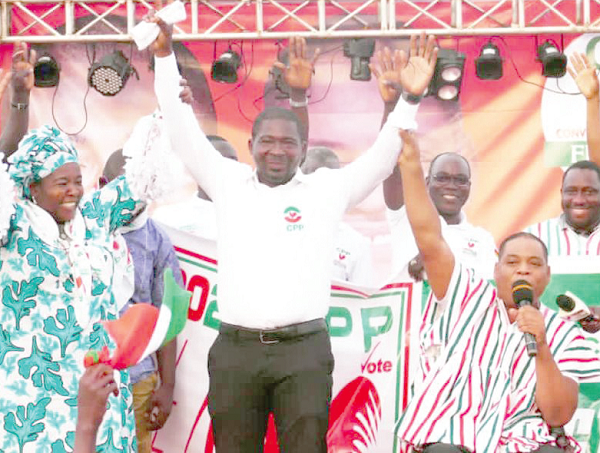 The Presidential Candidate of the Convention People’s Party (CPP), Mr Ivor Kobina Greenstreet, has promised a government that will address the basic needs of the people when he is elected President on December 7, 2020.

He said the CPP would surprise the New Patriotic Party (NPP) and the National Democratic Congress (NDC) with a massive victory through what he called “electric shock” and offer the people a four-year term of relief and development.

Mr Greenstreet was speaking to the Daily Graphic after his tour of some parts of the country to campaign, introduce parliamentary candidates, pay homage to some chiefs and elders and attend some festivals.

He toured the Ellembele, Jomoro and Kumbungu constituencies in the Western and Northern regions.

A teeming crowd gathered at Asaasetre in the Ellembele Constituency in the Western Region to witness the introduction of the party’s parliamentary candidate, Mr Matthias Bonzo Ewereko Boateng.

“It is time for Ghanaians to give the NDC and NPP an electric shock at in the December polls. Twenty-eight years of failed promises are enough,” Mr Greenstreet told the excited crowd.

Taking the people through the employment policy of the party, the CPP chairperson said it was only the CPP that could provide factories and employment as well as a guaranteed market price for farmers’ products.

He said that would be possible because the party would build factories that would require raw materials from the community, thereby providing ready market for their market produce, providing employment and bringing prosperity to the people.

At a rally at Jomoro, Mr Greenstreet introduced the party’s Parliamentary Candidate, Mr Ekye Kwesie, to a teeming crowd and said the CPP would need many MPs to support the President after the polls to execute its agenda.

He said that required the people to come out in their numbers and vote massively for the CPP presidential and parliamentary candidates to change the duopoly of NDC and NPP which had brought very little to them.

Just before attending the Damba Festival at Kumbungu, Mr Greenstreet introduced the party’s Parliamentary Candidate for Kumbungu, Ms Nabila Bashiru Alhassan, a very hardworking and down to earth individual who would represent the aspirations, hopes and concerns of the people of the area in Parliament.

He explained that the party’s inclusive nature was not a rhetoric but practical in how the current national executive was constituted, with women occupying very top positions, including the General Secretary. - #GhanaVotes2020